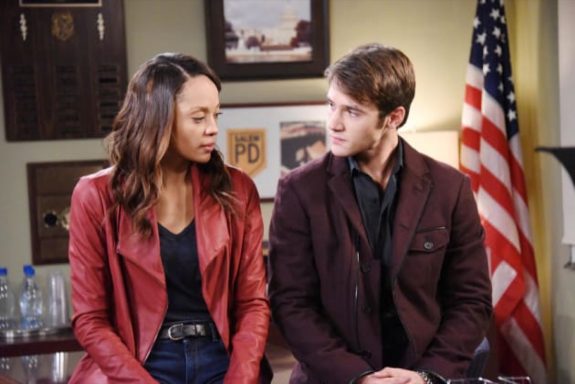 Days of Our Lives spoilers reveal JJ Deveraux (Casey Moss) agrees to help Lani Price (Sal Stowers). She ends up confiding in him and is pleasantly surprised that he agrees to help her. It is mostly due to Julie Williams (Susan Seaforth Hayes). Not only is she family, but she selflessly has helped him recover from his drug addiction. Now it’s his turn to help save her life by going after Gabi Hernandez DiMera (Camila Banus).

DOOL spoilers tease that Gabi has been a very naughty widow. Not only can she control Julie’s pacemaker, which could kill her, she forced Lani to dump Eli Grant (Lamon Archey) at the altar. Now, Lani has returned to Salem only to discover that Eli is going to marry the woman that tried to kill his grandmother.

Desperate, Lani decides to confide in someone that might be able to help her. There are serious concerns about Kristen DiMera (Stacy Haiduk) since she is all about Brady Black (Eric Martsolf) and Nicole Walker (Arianne Zucker) right now. So, she confides in an old friend and co-worker.

Days of Our Lives spoilers confirm that after hearing Lani’s story, he is livid. He will do anything to protect Julie and can’t believe his former girlfriend would stoop so low. Not only do they have a romantic history, but Gabi was the one that helped him prevent suicide after Theo Carver’s (formerly Kyler Pettis) police shooting. He agrees to help Lani save Julie from Gabi’s destructive pacemaker app.

It isn’t revealed exactly how Julie ends up being saved by JJ. However, Gabi trusts him and he might have an easier time getting access to her phone than Lani will. Julie is family and literally helped save his life, as well as Jennifer Horton’s (Melissa Reeves) life when she became addicted to pain medication. However, will Gabi find out and what kind of consequences will she deliver if the secret ever gets out?