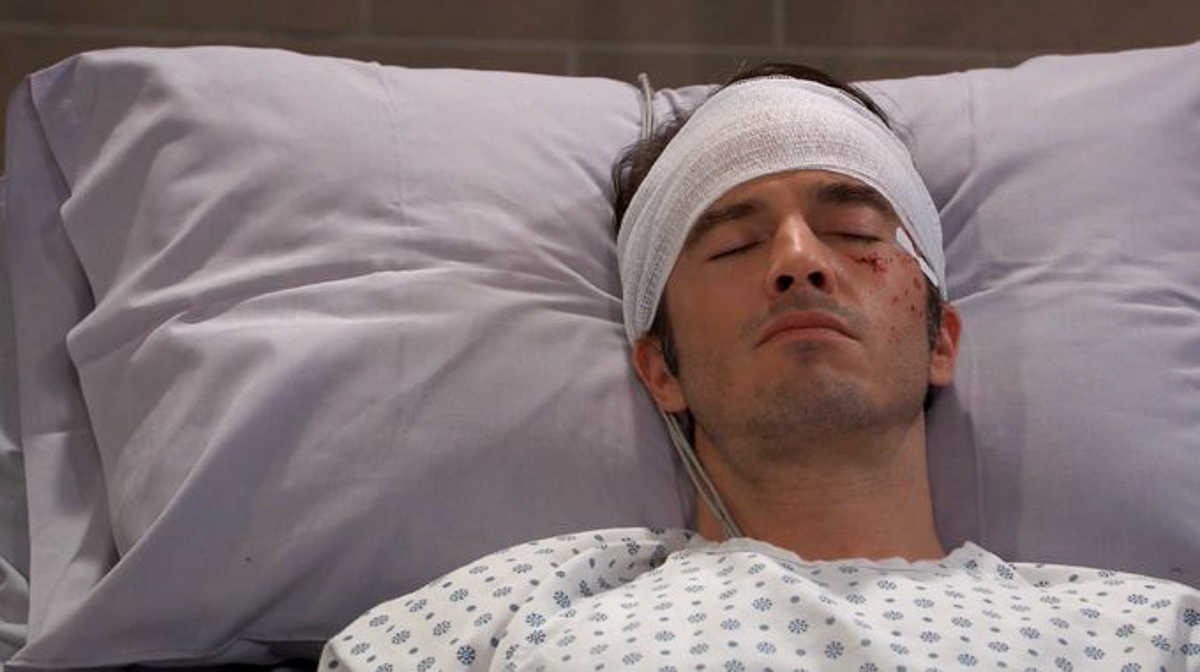 General Hospital spoilers tease that Lucas Jones (Ryan Carnes) will go back on life support while at Turning Woods; could someone try to kill him?

The General Hospital preview promo, “New Year, New Drama” appears to show Lucas Jones back on life support. Viewers will recall that Lucas came off of life support while in a medically induced coma at General Hospital after the car crash that nearly killed him. He was breathing on his own but then slipped into another coma and now doctors tell Julian Jerome (William DeVry) that Lucas may never wake up. Since he could breathe on his own, not requiring life support at the time, he was transferred to the Turning Woods Longterm Care wing. Could someone try to kill him, and who? – and why?

Brad Cooper (Parry Shen) confessed the baby switch of their original adopted baby, newborn Wiley Cooper-Jones who had died, with Nelle Benson (Chloe Lanier) for her living child, newborn Jonah Corinthos shortly before the crash. While Brad may be a little nervous about what will happen if an when Lucas wakes up, whether he will remember the confession or not, it would seem that Brad wouldn’t kill his husband to keep the secret; his marriage and his fear of losing Lucas to death outweighs his fear of his remembering the confession for the time being, although it is obvious that lies are Brad’s first line of defense when challenged. General Hospital viewers will recall that in a recent episode, after Willow Tait (Katelyn MacMullen) nearly let Nelle hold Wiley and Brad was questioned about knowing if Nelle was at General Hospital, he immediately lied and said he didn’t know, even though he had just come from talking to her in her hospital room when Michael Corinthos (Chad Duell) came and got him to go to where Willow was waiting with Wiley so they could have a visit. It would seem Brad can safely be ruled out as a potential killer of Lucas!

Harmony Miller (Inga Cadranel) was seen at Turning Woods in December 30th’s GH episode, when she was questioned why she was there as Willow and Samantha McCall (Kelly Monaco) were there to see Lucas, and she told them she was there for a job interview, reminding Willow that a condition of her parole was to obtain employment. However, she did go back to her name of Harmony instead of using her real name Lorraine, and Willow was suspicious that she may have returned to her Dawn of Day brainwashing again – especially when Willow and Sam received texts inviting them to Shiloh Archer’s (Coby Ryan McLaughlin) memorial service.

Sam and Willow both suspected Harmony set it up although she denied it and blamed other followers including Daisy Kwan (Kelsey Wang). Plus, Harmony got the same text (although she could have been looking at her original copy she sent). Harmony would have a reason to kill not only Lucas, but Brad as well if she wanted to invalidate the adoption of Shiloh’s heir, not knowing the original baby died! There is a possibility that Nelle herself may also find employment at Turning Woods after her parole, and may also try to kill Lucas and Brad for the same reason, to invalidate the adoption and make off with Wiley!