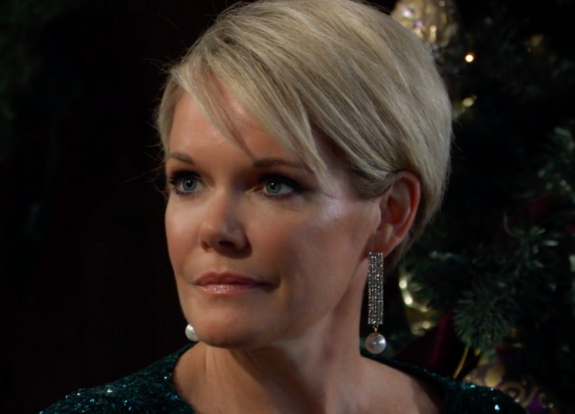 Jax wants to speak to Ava privately. Ava teasing Jax about being a white knight. Charlotte Cassadine (Scarlett Fernandez) arrives and shows Laura her new dress. Charlotte looks for her bodyguard who has disappeared. Charlotte tells Laura about her bodyguard’s ring. Charlotte describes the ring to Laura. Ava tells Jax she and Nina have called a temporary choice. Curtis offers to leave, Jordan declines. Liesl pulls Jax back into the room to speak to him about medical ideas.

General Hospital’s Nina picks up the DNA test at the hospital and runs into Sasha Gilmore (Sofia Mattsson). Nina drops the test results and Sasha sees them. Sasha wants to know how long Nina has known that she wasn’t acting alone. Nina tells Sasha she knew at the last wedding. Sasha doesn’t understand why Nina is marrying Valentin if she knows the whole story. Sasha wants to explain why Valentin went to these extremes for her. Sasha tries to get Nina to reconsider her plan.

Nina wishes her Happy New Year and leaves. Sasha goes to meet Michael and tells him about the conversation with Nina. Sasha is considering going to the wedding. Nina finally arrives to get ready for the wedding. Charlotte was worried, she’s glad Nina is there. Laura tells Curtis about the conversation with Charlotte. Sasha is worried about Nina. Nina gets ready for the wedding and Jax knocks on the door.

General Hospital’s Valentin Cassadine (James Patrick Stuart) meets with Martin Grey (Michael E. Knight) and informs him that he doesn’t want to lose his family or his inheritance. Valentin believes the codicil still exists. Valentin tells Martin that Ava believes in sloppy vengeance and believes she destroyed the painting and kept the codicil. Martin joins Ava and talks about the artwork. Martin wants to show Ava something and they leave the room together. Liesl follows Ava and Martin.

Martin leads Ava upstairs where Valentin confronts her. Martin returns and asks Liesl to fix him a drink. Valentin brings up Helena’s portrait to Valentin. Valentin wants to codicil. Valentin wants to buy the codicil from Ava. Ava tries to walk away from Valentin. Ava tells Valentin she’s not intimidated by him. Valentin grabs Ava and says she’s not going anywhere. Martin is very nervous and Jordan asks why. Valentin throws Ava off the balcony.

General Hospital’s Carly Corinthos (Laura Wright) tells Sonny Corinthos (Maurice Benard) that Nikolas Cassidine (Marcus Coloma) is alive and well in Port Charles. Carly explains that Nik has Jax helping him try to take back the Cassadine fortune. Carly explains about the codicil. Sonny wishes he could have been there to watch that painting burn. Sonny says Jax could be in legal trouble, Carly says no one will know. Carly reminds Sonny that they could all get in trouble over Dev Corbin (Ashton Arbab) if Sonny turns Jax into the cops.