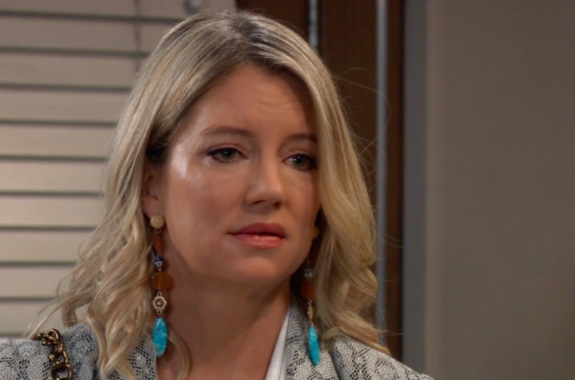 General Hospital (GH) spoilers for Friday, January 3, tease that love will be in the air for Harrison Chase (Josh Swickard) and Willow Tait (Katelyn MacMullen). They’ll cuddle in bed after lovemaking and reflect on 2019. Although Willow had plenty of Shiloh Archer (Coby Ryan McLaughlin) troubles, she’ll be glad she found Chase. Willow will think 2020 is going to be an even better year for them, but we’ll see about that!

GH Spoilers: Ned Quartermaine Will Tell Brook Lynn Ashton That She Made Her Bed And Now She Has To Lie In It

Over with Ned Quartermaine (Wally Kurth), he’ll tell that Brook Lynn Ashton (Amanda Setton) made her bed and has to lie in it. Ned will feel like he doesn’t need to be too hands-on when it comes to Amanda’s problems. She’s a grown woman, so her latest manager mess may be one she has to tackle herself – at least for now.

Meanwhile, Michael Corinthos (Chad Duell) will hint to Sasha Gilmore (Sofia Mattsson) about needing a favor. However, it seems Michael’s real goal here will be providing a distraction. He won’t want Sasha to keep feeling so down on this New Year’s Eve, so he’ll try to pep things up in typical Michael fashion.

Next, Laura Webber (Genie Francis) will express her concerns to Lulu Spencer (Emme Rylan). She’ll contend that whether they like it or not, they have to accept it. Of course, Laura will also have to reveal what “it” is, but it’ll undoubtedly tie in with Charlotte Cassadine’s (Scarlett Fernandez) signet ring revelation.

Charlotte insisted that her secret bodyguard was wearing a ring with the Cassadine crest. Laura may feel like they have to accept the possibility that Nikolas Cassadine (Marcus Coloma) could be alive. Then again, she might contend that Charlotte’s issues run deeper than they expected. Whatever the case, Laura and Lulu are in for a shock along with the other guests.

Upstairs at Wyndemere, Jasper “Jax” Jacks (Ingo Rademacher) will try to talk Nina Reeves (Cynthia Watros) out of seeking revenge. She’ll insist Nina’s better than this and point out that hurting Valentin Cassadine (James Patrick Stuart) would mean hurting Charlotte, too. Jax will hope Nina’s willing to call off this takedown.

Over with Charlotte, she’ll find her papa and wonder what he’s up to. Valentin just shoved Ava Jerome (Maura West) over the parapet and into the water, so he’ll have to shift Charlotte’s attention back to the nuptials. As for Ava, she may be down, but she’s not out! Two stunning guests are set to blow up the wedding, which means wet Ava may drag herself in along with Nikolas.

GH Spoilers: Jason Morgan Will Get Some Terrible News

Other General Hospital spoilers say Jason Morgan (Steve Burton) will get some terrible news. Sam McCall (Kelly Monaco) just pointed out that it was the last time she’d see Jason. She’ll reveal that she’s headed back to Pentonville – at least unless they can work out some kind of deal.

Jason’s mob ties mean he can’t be around Sam, and Diane Miller (Carolyn Hennesy) will confirm it’s a problem. Even if Jason can work out a deal to keep Sam free, that doesn’t solve their romantic issues. Jason and Sam want to be together, so this will be a tough jam to work around.

Nevertheless, GH fans can expect things to take a turn for the better soon enough. General Hospital spoilers still point to a pretty positive start to 2020 for Jason and Sam, so let’s hope all this gets sorted out quickly. We’ll give you updates as other GH details and rumors. Stick with the ABC soap and don’t forget to check back often for the latest General Hospital spoilers, rumors, updates and news.