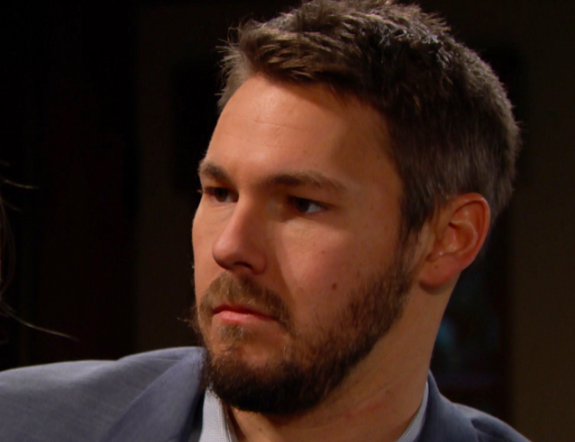 The Bold and the Beautiful spoilers for Friday, January 3, tease that Shauna Fulton (Denise Richards) will have a talk with Thomas Forrester (Matthew Atkinson). As B&B viewers know, Thomas has successfully managed to get Hope Logan (Annika Noelle) to work with him at Forrester Creations. He manufactured a fashion showdown and created a situation in which the only way Hope can save Hope For The Future is to work with him.

Thomas also has convinced Hope that he’s moved on romantically with Zoe Buckingham (Kiara Barnes). He’s got a big ruse going, which has involved sleeping with Zoe and inviting Zoe to the Forrester Christmas celebration so that everyone would see them as an item. And the plan seems to have Hope pretty confident that Thomas has moved on and is no longer obsessed with her.

So far, the only person who knows about Thomas’ ruse with Zoe is Thomas’ good friend Vinny Walker (Joe LoCicero), but it appears that soon Shauna will find out about Thomas’ plot to win back Hope, too. B&B spoilers say that Thomas will reveal his plan to eventually be with Hope to Shauna on Friday’s episode.

We’ll see exactly how this comes out, but it’s possible that Shauna might overhear Thomas talking to himself or even talking to Vinny via phone. Or, perhaps Thomas will just outright tell Shauna about his plan for other reasons. At any rate, B&B spoilers say that he’ll strongly encourage Shauna to keep quiet about what she knows.

In addition, Thomas will ask Shauna to keep pursuing his father, Ridge Forrester (Thorsten Kaye). All of this will probably be pretty uncomfortable for Shauna, since she genuinely loves Ridge and doesn’t want to risk her relationship with him by keeping a secret from him. But it looks like Thomas will insist that they can each get what they want if they play their cards right – he can have Hope and she can have Ridge.

‘The Bold and the Beautiful’ Spoilers: Brooke Won’t Give Up Two Fights – Tough Year Ahead https://t.co/4S44kc2Bjh pic.twitter.com/Sw9lOAXmCl

Meanwhile, on Friday’s new episode of B&B, Liam Spencer (Scott Clifton) will face a disappointing realization. As B&B viewers know, he recently enlisted Zoe to be his eyes and ears where Thomas was concerned, so that he could learn Thomas’ intentions when it comes to Hope. Zoe was supposed to be his spy and get the dirt on Thomas.

Well, it looks like Liam will realize that Zoe has been successfully manipulated by Thomas. Perhaps he’ll realize from talking with Zoe that she’s falling for him for real, which clearly compromises her mission. He may have a meeting with Zoe, and at any rate he’s going to realize that Zoe is no longer going to be an effective ally.

Zoe might report to Liam that she believes that Thomas is over Hope and that he no longer poses a threat to anyone. It looks like she’ll have become a complete believer in Thomas, and Liam will realize that she’s virtually useless as an objective spy. That will certainly frustrate Liam, who was really counting on Zoe for intel on Thomas.