The Young and the Restless Spoilers: Friday, January 3 – Sharon Suspects She Has Cancer – Chelsea & Adam Reconnect – Tessa Was Married 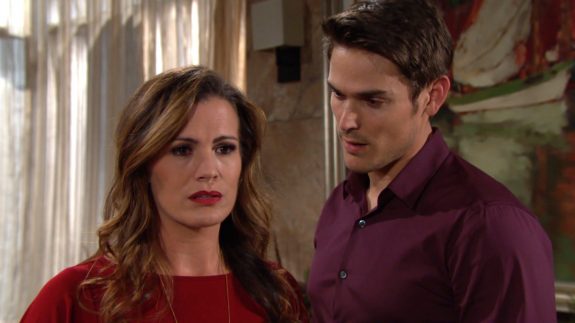 The Young and the Restless (Y&R) spoilers for Friday, January 3, tease that Nick Newman (Joshua Morrow) will catch up with Summer Newman (Hunter King) at home. Nick will tell Summer that he and Chelsea Lawson (Melissa Claire Egan) have ended their relationship, and that he came to a realization. Summer will offer her support and note that she always thought that they were both on the rebound.

Next on Y&R, at Adam Newman’s (Mark Grossman) penthouse, Chelsea will tell Adam that he deserves an explanation for last night. She’ll explain that he saw a goodbye between her and Nick at Society, but that she’s not ready to be with him and doesn’t want to rush things. Adam will suggest that they have a date.

Later, the two will have a New Year’s brunch together at the penthouse. During the brunch, Adam will tell Chelsea that he loves her because of her imperfections, and he suspects that she feels the same way about him, too. He’ll offer a toast to them both and what can be.

Next on Y&R, Mariah Copeland (Camryn Grimes) will find Tessa Porter (Cait Fairbanks) on the patio at Crimson Lights. Tessa will be nervous about her upcoming meeting with Tanner Watts (Chase Coleman). Mariah will offer to go with her to the meeting, but Tessa will decline, and she’ll take off as Faith Newman (Alyvia Alyn Lind) arrives and learns about Tessa’s meeting.

Meanwhile, in the main area of Crimson Lights, Sharon Newman (Sharon Case) will be preoccupied, and Faith will come in to say her goodbyes before heading back to boarding school. Later, Summer and Nick will stop by, and Summer and Faith will go talk while Sharon still seems distracted. Nick will tell Sharon about his split with Chelsea. After saying goodbye to Faith, Sharon will call her doctor’s office to make an appointment because she found a lump in her breast this morning.

Next on Y&R, at Society, Kevin Fisher (Greg Rikaart) and Chloe Mitchell (Elizabeth Hendrickson) will prepare to tell their family about the new baby they’re expecting. Turns out, they’ve already told Bella Fisher (Cali May Kinder) and she was thrilled. Lauren Baldwin (Tracey E. Bregman) and a hungover and grouchy Michael Baldwin (Christian LeBlanc) will arrive. Fenmore “Fen” Baldwin (Zach Tinker), Esther Valentine (Kate Linder), and Bella will then arrive.

Michael will attempt to leave, then there will be several interruptions as Kevin attempts to make the big announcement: Esther will say that she’s now on a dating app, Lauren will announce that Fenmore’s is going global, and Kevin won’t be able to get in a word edgewise. Finally, Bella will announce that she’s going to be a big sister, and everyone will celebrate.

Across the room, Mariah and Devon Hamilton (Bryton James) will talk about work and she’ll let him know that Tessa is meeting with Tanner. This will impress Devon, as he’d love to have Tanner as a client at LP. Mariah will say that this could be Tessa’s big break.

Later, Mariah will be thrilled that Tanner asked Tessa to go on tour with him, but she’ll be shocked to hear that Tessa wants to turn down the offer. Tessa will then proceed to explain that she knew Tanner before, and that he is her ex-husband.