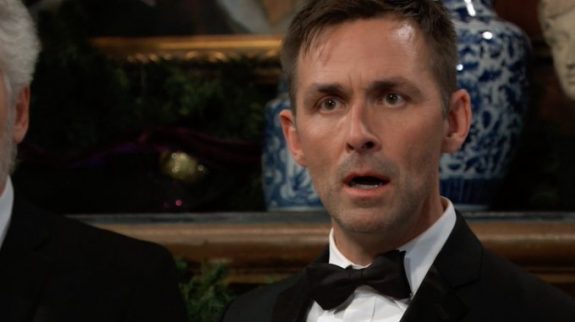 Jax tells Nina that Charlotte Cassadine (Scarlett Fernandez) is going to end up caught in the middle of this mess. Jax tells Nina she doesn’t want to take Charlotte out too. Jax believes Nina needs to leave now. Charlotte interrupts Nina and Jax’s conversation. Nina walks up to Valentin and smiles.

General Hospital’s Sam McCall (Kelly Monaco) informs Jason Morgan (Steve Burton) that she can’t see him anymore. Sam says this is her fault. Jason tries to call Sam saying the officer is gunning for him. Sam asks if there is any way to fight this. Diane arrives and Jason asks how to fight this stipulation. Diane says they can’t fight this. Diane tells Jason that his plea deal caused this. Sam tries to calm Jason. Diane tells Sam she could be taken from the kids for the full two years if she sneaks around to see Jason.

Diane tells them it only takes one time to get caught. Diane suggests they get Damien Spinelli (Bradford Anderson) involved. Diane says the parole officer has total control until they come up with something to shut her down. Jason leaves with Diane. Sam is very upset over this development. Jason tells Sam they have to find a fix legally. Jason cannot handle the kids missing Sam. Jason tells Sam they cannot risk her going back to prison, the kids need to be with Sam. Jason and Sam kiss before he leaves with Diane. Sam and Jason can only see each other while in the presence of their lawyers. Diane asks if Jason is ok and he says no.

General Hospital’s Diane Miller (Carolyn Hennesy) looks over Brook Lynn Ashton’s (Amanda Setton) contract. Diane tells Brook that this is a tightly written contract. Diane suggests that Ned buy this guy out. Diane gets a text and gets up to leave. Brook tries to detain Diane but she has to go. Brook tells Ned that the manager wants more from her than the contract calls for.

Ned refuses to pay off the manager. Ned says he’s not going to pay this guy because she didn’t read the contract. Ned says Brook doesn’t have to work with this man. Ned tells Brook she can stay in Port Charles and regroup. Brook should let the contract run out. Ned isn’t paying anyone off. Olivia Quartermaine (Lisa LoCicero) tells Ned that Brook is like his mother. Ned is lucky that Brook is back in his life. Ned is also lucky that he has Olivia in his life.

General Hospital’s Harrison Chase (Josh Swickard) and Willow Tait (Katelyn McMullen) are celebrating the new year at a hotel. Willow and Chase talk about how good they hope this year will be. Michael Corinthos (Chad Duell) tells Sasha Gilmore (Sofia Mattsson) how beautiful she is. Michael keeps looking at Brook and Ned across the room. Michael is afraid they are about to have some Quartermaine fighting.

Michael needs Sasha’s help to deal with this. Willow and Sasha go to the restroom and discuss men. Chase tells Michael that he and Sasha look happy. Michael and Chase discuss Sasha’s new job. Michael wants everything to work out for Sasha. Everyone talks about things that have happened this past year. Michael tells the trio that none of them would survive either of his families.

General Hospital’s Liesl Obrecht (Kathleen Gati) grows more worried about the wedding. Jordan Ashford (Briana Nicole Henry) and Curtis Ashford (Donnell Turner) speak to Martin Grey (Michael E. Knight) at the wedding. Valentin Cassadine (James Patrick Stuart) throw Ava from the balcony of the castle. Charlotte arrives and asks why Valentin is up there. Lulu Spencer (Emme Rylan) comes up behind Charlotte and says they are there to look at the moon. Lulu and Laura Webber (Genie Frances) talk about Charlotte.

Charlotte tells Valentin she is afraid something will go wrong. Laura tells Lulu that she needs to control her hatred toward Valentin a little bit. Valentin and Martin wait for Nina to arrive. Nina slowly approaches her guest. Valentin lets out a sigh of relief when she finally arrives. Valentin speaks to Nina before they say their vows. Nina makes a speech as well. Martin starts with he vows. Valentin says I do. Nina starts to say I do when Nikolas Cassadine (Marcus Coloma) burst in with Ava Jerome (Maura West) in his arms.