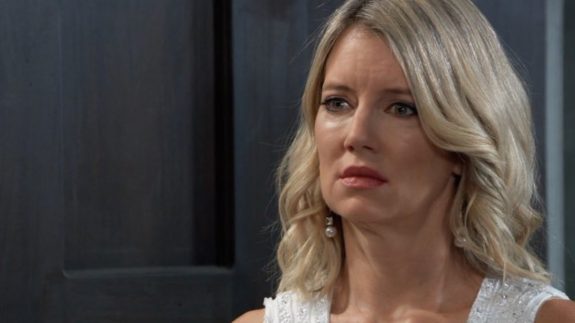 General Hospital (GH) spoilers for Monday, January 6, tease that Nikolas Cassadine (Marcus Coloma) will cause quite an uproar at Nina Reeves (Cynthia Watros) and Valentin Cassadine’s (James Patrick Stuart) derailed wedding. Nik just came barreling in with drenched Ava Jerome (Maura West) in his arms – and he’s got a major announcement to make.

Valentin will be shocked over the fact that Nikolas is alive along with Nik’s loved ones. As they all try to process this bombshell, Nikolas will explain that he made a deal with Ava. He now has the codicil, which means Valentin loses everything. Nina will seem quiet and not very taken aback, so Valentin will realize she’s been scheming, too.

GH Spoilers: Nikolas Cassadine Will Cause An Uproar At Nina Cassadine And Valentin Cassadine’s Wedding

General Hospital spoilers say Nina will turn cold as she confesses. It looks like the warmth that was filling her heart briefly will fade fast. Nina will admit she’s known about Valentin’s role in the fake daughter plot all along. She cooked up a plan for revenge, which eventually included Ava and then Nikolas.

Lulu Spencer (Emme Rylan) will lash out at someone at this gathering. She’ll accuse this person of being behind this, so she may be the one who prompts Nina’s confession. As for Laura Webber (Genie Francis), she’ll have to wrap her head around the fact that Nik is alive and hid the truth. GH spoilers say it’ll mean emotional overload for both Lulu and Laura.

Maxie Jones (Kirsten Storms) will talk to Peter August (Wes Ramsey) about this bomb that’s just dropped. She’ll be curious why Nikolas stayed away all this time, but Peter will soon have to deal with Valentin’s attack. He’ll get punched in the stomach by Valentin, so it seems this whole ordeal will leave Valentin bitter and ready to strike.

General Hospital Spoilers: Sasha Is Encouraging To Liesl About Her Turning Over A New Leaf https://t.co/OCivrU8gLY pic.twitter.com/Q6qI9iuTun

Other General Hospital spoilers say Cameron Webber (William Lipton) will blast Trina Robinson (Sydney Mikayla) for interfering. He won’t get why she couldn’t just have just stayed out of it. Cam may be upset about Trina spilling the crush beans and pulling Josslyn Jacks (Eden McCoy) closer to Dev Cerci (Ashton Arbab).

Trina may determine that Cameron’s crush is just as strong. She might be apologetic for meddling and potentially costing Cam his shot with Josslyn. However, things should take a more pleasant turn when Cam and Trina make a pact.

Over with Dev, he’ll reassure Josslyn as they kick off 2020. Dev will certain this is going to be a better year for Josslyn. It won’t be long until Joss just can’t help herself and has to lean in for a kiss. Sadly, this lip lock won’t go as well as Josslyn hopes. She’ll face a tough letdown soon, so Dev may suggest he’s just looking for friendship. Josslyn should be confused over Dev’s mixed signals, but maybe they can figure this mess out eventually.