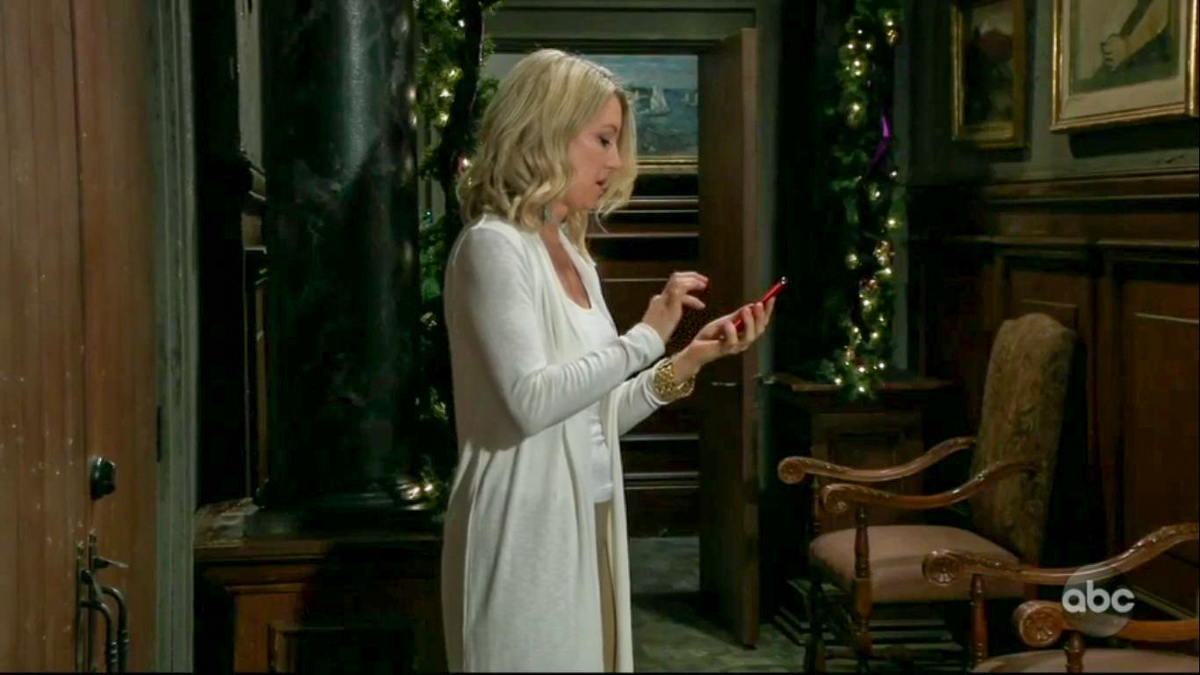 General Hospital spoilers tease that Nina Reeves (Cynthia Watros) won’t be interested in a romance with Jasper “Jax” Jacks (Ingo Rademacher) whether her marriage to Valentin Cassadine (James Patrick Stuart) takes place or not and whether she carries out her revenge plot against him or not; she still loves Valentin deeply and she can’t just turn off her feelings like a faucet!

General Hospital Spoilers – If Jasper Jacks Hopes To Have A Relationship With Nina Reeves He’ll Just Have To Bide His Time!

If Jax hopes to have a romantic relationship with Nina, he’ll just have to bide his time and wait until she’s over Valentin. For the foreseeable future, she can always use a friend and a shoulder to cry on, but Jax should know and understand this; even if she did rebound to him, rebound relationships seldom work out – there is usually just too much emotional baggage that can hinder things in a new relationship.

Longtime General Hospital viewers will recall that Nina was barely over Silas Clay (Michael Easton) before she got involved with Valentin when he came to town, unless you count that short fling thing with Ric Lansing (Rick Hearst) in between Silas and Valentin! That was a terrible thing – Ric and Nina’s late mother, Madeline Reeves (Donna Mills) were plotting together to get Nina’s money and that’s the only reason he married her for that short time!

GH Spoilers – Does Jasper Jacks Know What He Could Be Getting Into If Nina Reeves’ Sanity Were To Take Another Dive?

Does Jax know anything about Nina’s history before Valentin? Does he know what he could be getting into if Nina’s sanity took another dive? She appears to be much stronger than she once was, and not nearly so fragile, but with so much heartache in such a short time it could take a toll! In between Ric and Valentin there was Franco Baldwin (Roger Howarth) – that was a deep, caring relationship but Franco was trying to save a very troubled Nina from herself by being her friend.

That was when Ava Jerome (Maura West) was pregnant with Avery Corinthos-Jerome (Ava and Grace Scarola) and induced labor and kidnapped Avery and took her to Canada, closely followed by Franco who helped in getting the newborn back safe and Nina as well, Silas helping also as he convinced Nina to give the baby back to Ava. Nina wound up in Shadybrook and Franco’s birth mother Heather Webber (Robin Mattson) tried to harm her, and Franco took LSD so he would be put in Shadybrook too so he could protect Nina.

It was a short year after that when Valentin came into her life. But then, Jax does have all that experience with Carly Corinthos (Laura Wright) as an ex-wife, doesn’t he?! Nina hasn’t really done any worse things in her past life or been in any worse shape that Carly has, so maybe he’s not worried about what would happen if Nina’s sanity took another nosedive! Carly, after all has been in Shadybrook a couple of times, and then Jax has had to deal with a criminal brother Jerry Jacks (Sebastian Roche) so he probably is up for the challenge of Nina if and when she is ready for a new romance! However, it might be a long time to wait!