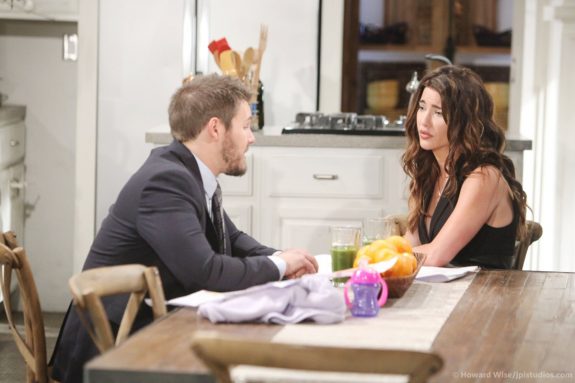 The Bold and the Beautiful spoilers for Monday, January 6, tease that someone new will catch Steffy Forrester’s (Jacqueline MacInnes Wood) eye, and vice versa! B&B viewers have been wanting a new man for Steffy for months, and it appears as if Steffy will finally have someone interested in her on Monday’s episode, and it’s someone who will be brand new to Forrester Creations and who isn’t a Spencer man.

As B&B viewers know, Steffy has been in the middle of a love triangle with Hope Logan (Annika Noelle) and Liam Spencer (Scott Clifton) for a considerable amount of time. And although Liam seems to be pretty firm in his choice of Hope at this point, there are still forces in place that are pushing for Steffy to gravitate back to Liam. For example, Thomas Forrester (Matthew Atkinson) wants Steffy and Lim back together so he can get Hope for himself.

The Bold and the Beautiful Spoilers: Shauna Learns The Truth About Thomas – Will She Protect Him?

But there are plenty of B&B viewers who would like to see Steffy with a completely new man. As B&B viewers know, Steffy has been in relationships with both Liam and Wyatt Spencer (Darin Brooks), and she also had an affair with Bill Spencer (Don Diamont) a couple of years ago. Well, it looks like Steffy could be on the path to having a hot new romance if she lets herself go there.

On Monday’s B&B episode, a new man to Forrester Creations, “Collin” (Oli Green) will meet Steffy at the office and it looks like sparks may fly. Oli Green, who will portray Collin, is a renowned fashion model in real life, so he’s a good-looking guy. It appears that he’ll get along well with Steffy, who will be flattered when he asks her out on a date.

Meanwhile, on Monday’s new episode of B&B, Liam will be completely taken aback from what he’s just heard from Thomas. As B&B viewers know, Thomas just threatened Liam, essentially saying that he wanted to visit Liam’s grave in the near future. Liam had come to confront Thomas, but Thomas totally turned the tables and ended up threatening him in return.

The Bold and The Beautiful Spoilers: Steffy and Liam Reunited – But For How Long? https://t.co/YhPu9T9cll pic.twitter.com/MBV5iqXhe6

It appears that Liam will quickly find Hope and Steffy after Thomas’ threat and fill them on what’s just happened, which will probably stun them both, since they seemed to be under the impression that Thomas had really changed and was reformed. It seems that Steffy in particular will be upset by the turn of events, as ongoing B&B spoilers say that she’ll ultimately confront Thomas about threatening Liam.

But Thomas will probably try to smooth things over with Steffy, insisting that Liam might have misunderstood him or even outright denying Liam’s story. It will be interesting to see how both Hope and Steffy react to Liam’s account about Thomas’ threat – after all, Hope really needs Thomas to win the fashion showdown, so she might not want to let Thomas off the hook as her designer.

Still, it’s hard to imagine Liam being able to let it go after Thomas made such a serious threat against his life. Ongoing B&B spoilers indicate that Liam will soon ask Hope to marry him, but there will be a big stipulation in that she’ll have to rid her life of Thomas completely. It looks like Thomas’ threat will have some serious implications for everybody.