The Bold and the Beautiful Spoilers: Shauna Learns The Truth About Thomas – Will She Protect Him? 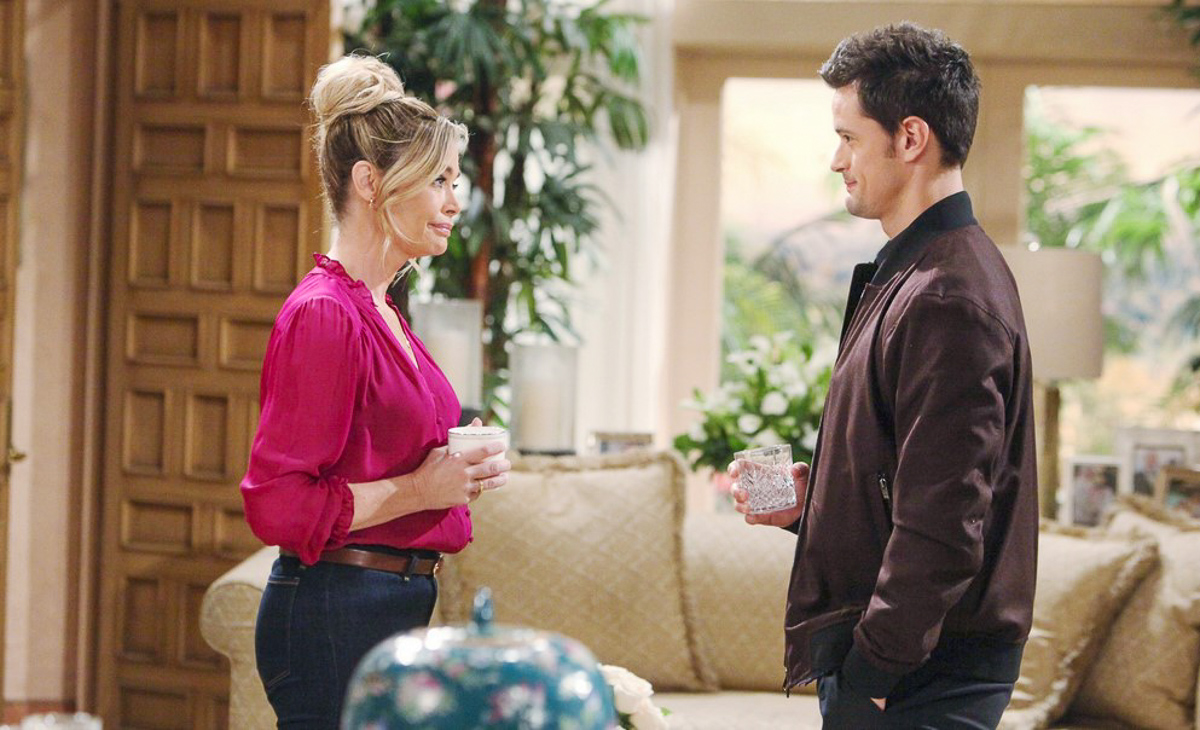 The Bold and the Beautiful (B&B) spoilers tease that Shauna Fulton (Denise Richards) will soon learn some explosive information. As B&B viewers know, Thomas Forrester (Matthew Atkinson) is making a concerted effort to convince everyone around him that he’s completely over his obsession with Hope Logan (Annika Noelle). Of course, he’s still as obsessed with her as ever, but he knows that his ability to spend time with her is dependent on everyone thinking that he’s moved on with his life.

So, Thomas has embarked on a new relationship with Zoe Buckingham (Kiara Barnes), as a means of proving to everyone that he’s truly over Hope. This is a calculated move on Thomas’ part, since he knows that his family and Hope are watching him closely to determine whether he’s truly reformed and is turning his life around. He knows that if he wants to work on Hope’s line with her, he needs it to look like he’s now happily with Zoe.

Well, Thomas will end up going to great lengths to make everyone believe that he’s moved on with Zoe. He’s been pulling out all the stops and romancing Zoe big time, so that the whole thing looks legit. According to B&B spoilers, he and Zoe will even make love, solidifying their relationship and officially becoming a couple.

But deep down, Thomas’ plan will be to eventually be with Hope. He’ll want them to get closer as they work together on the upcoming fashion showdown, and he’ll even take measures to push Steffy Forrester (Jacqueline MacInnes Wood) in the direction of Liam Spencer (Scott Clifton) soon as part of his plan. In fact, he’ll probably be thinking that he’s got everyone fooled and has it made in the shade.

Right now, the only other person who knows about Thomas’ plan to play hard to get with Hope is his buddy Vinny Walker (Joe LoCicero). But that’s about to change. B&B spoilers say that Shauna will soon learn about Thomas’ underlying plan to get Hope by pretending to move on with Zoe…and that he may even tell Shauna about the plan voluntarily.

Of course, for Shauna, this will probably be information that she didn’t want to know, since it involves Ridge Forrester’s (Thorsten Kaye) son. In fact, she might consider herself to be in a bit of a moral dilemma about the whole thing, thinking that she should tell Ridge about what his son is really up to. She knows that Ridge believes that Thomas has changed, and if she were to tell Ridge about Thomas’ plan, it would probably shatter him.

And there’s also the matter of what it would do to Ridge’s marriage with Brooke Forrester (Katherine Kelly Lang) if she told Ridge the truth about Thomas. Shauna will probably figure out pretty quickly that if she tells Ridge that Thomas is still manipulating, then he could realize that Brooke is right about his son and their marriage could be saved.

Well, it looks like Thomas will have thought all of this through as well, since B&B spoilers say that he’ll tell Shauna that he’s pretty sure that she’ll keep his secret and that she should keep pursuing Ridge. Shauna will probably feel torn about what to do, but it seems that Thomas will feel pretty confident that she’ll keep her mouth shut since she really seems to love and want Ridge.

We’ll see what Shauna ultimately does, but something tells us that she’ll likely struggle with what to do over the situation. She won’t want to hurt Ridge, and she certainly won’t want to do something that could drive Ridge back to Brooke. But then again, Shauna won’t want to be privy to yet another explosive secret.

What do you think Shauna will do? Will she keep Thomas’ plan a secret? Stay tuned to B&B and don’t forget to check Hollywood Hiccups often for the latest Bold and the Beautiful spoilers, updates, and news.