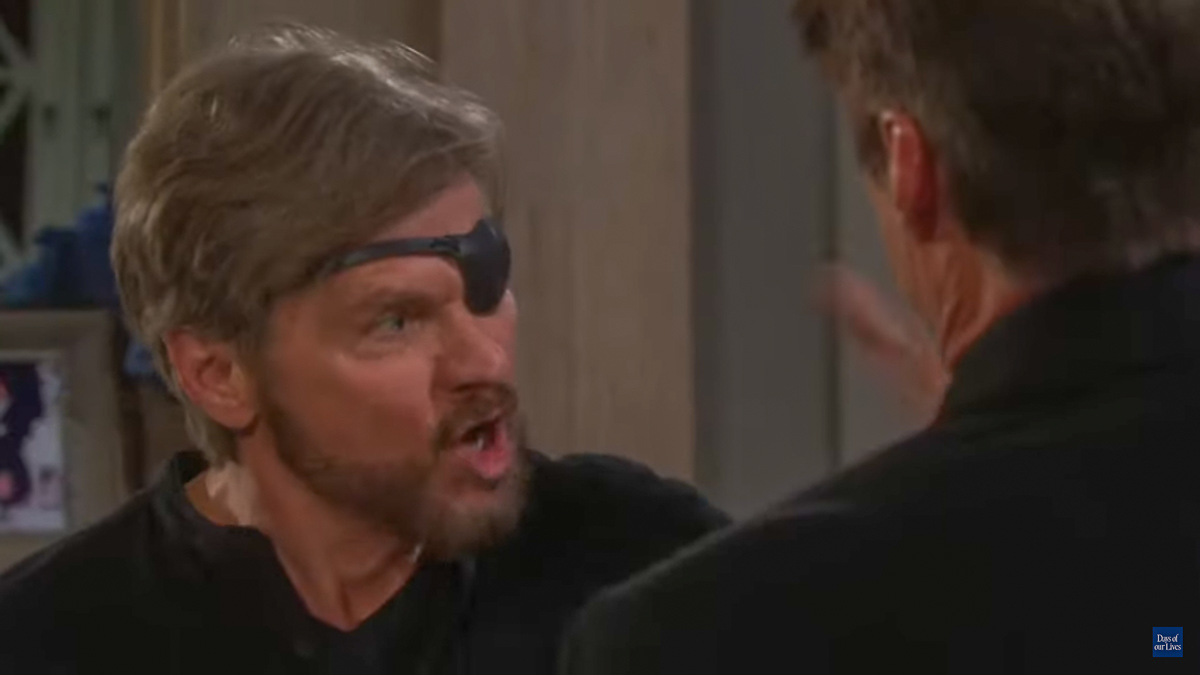 Days Of Our Lives Weekly Preview

Lives hang in the balance as Victor collapses, and Ben waits to hear if he’ll be given the death penalty! In the midst of Ciara Brady’s (Victoria Konefal) confrontation with her grandfather, Victor Kiriakis (John Aniston) over his suspected framing of her boyfriend Ben Weston,(Robert Scott Wilson) Victor has a stroke and slumps over unconscious in his chair, as Ciara cries out to him to wake up! 911 is called and Victor is wheeled into Salem University Hospital, with Ciara close behind. Xander Kiriakis (Paul Telfer) tells her if Victor dies, it will be on her head! Elsewhere in the hospital, Kayla Brady (Mary Beth Evans) gets a comforting hug from Jack Deveraux (Matthew Ashford) while later, he goes to the home of John Black (Drake Hogestyn) and Dr. Marlena Evans (Deidre Hall) to confront his brother “Steve Johnson” aka Stefano DiMera (Stephen Nichols) about his mistreatment of Kayla!

Steve shouts that Kayla has moved on, while Jack shouts that Steve hurt her! Meanwhile, at the prison, Justin Kiriakis (Wally Kurth) has been busy defending Ben, trying to get the murder charges dropped or at least mitigated so that Ben will not be executed for the murder of his sister, Jordan Ridgeway (Chrishell Stause). Justin is before the prison board, insisting his client does not deserve the death penalty. Back at the prison, in the visitation room, Ben gets a visit from Xander, where Xander confronts him about Ben’s “nosy girlfriend” Ciara, and it escalates into a fight as Ben angrily turns over a table and rushes Xander, grabbing him by the front of his shirt! Then Justin comes in and tells him the ruling has come in. It can’t be good news, because Ben hangs his head and puts it in his hands!

On Monday, Kayla presses Steve to tell her about the woman he loves, after he tries to shoo her away by telling her he is in love with another woman! Stefano may begin to think twice about the wisdom of pretending to be Steve in Steve’s body! Elsewhere, Evan Frears (Brock Kelly) and Sonny Kiriakis (Freddie Smith) share a kiss, since Will Horton (Chandler Massey) made it abundantly clear that Sonny should forget about him and move on! Also on Monday, as shown in the Days of Our Lives weekly preview, Ciara’s confrontation with Victor takes a stunning turn, and Xander threatens Ben.

On Tuesday, Eli Grant (Lamon Archey) questions Lani Price (Sal Stowers) as to why she broke the storefront window of “Gabi Chic”, Gabi DiMera’s (Camila Banus) store in Horton Town Square. Viewers will recall that she threw a large flowerpot through the window in frustration, shattering the window completely and setting off alarms! It will be interesting to see what she says! Meanwhile, Brady Black (Eric Martsolf) learns about his grandfather’s condition and rushes over to Salem University Hospital! Also on Tuesday, Kristen DiMera (Stacy Haiduk) uses Gabi to get what she wants, and Xander blames Ciara for Victor’s medical crisis as shown in the preview.

On Wednesday, Nicole Walker (Arianne Zucker) lies to Kristen about her relationship with Brady, making it out to be much more than it really is. Elsewhere, Lani confides in JJ Deveraux (Casey Moss) about what really happened to make her break up with Eli at the altar, and about the app on Gabi’s phone that she can control Julie Williams’ (Susan Seaforth Hayes) heart rate with; he offers to help in whatever way he possibly can. Also on Wednesday, Gabi tries to cover her tracks with Eli, and Kate Roberts (Lauren Koslow) warns Will about Evan.

Days of Our Lives Spoilers: Eli Proposes to Gabi – Payback To Lani For Breaking His Heart? @celebratesoaps https://t.co/SUGXu8cKev

On Thursday, Brady decides to go along with Nicole’s ruse to make their relationship appear much more than it is to Kristen, and Xander warns Ciara to stay away from Victor, concerned that if Victor sees her it will only upset him and possibly cause his condition to become worse! Also on Thursday, Kristen is thrown when someone unexpected shows up on her doorstep, and as shown in the preview, Jack rips into “Steve” and is perplexed by his brother’s behavior.

On Friday, Ciara delivers bad news to Ben – although he has lost his last appeal and is now on death row, Justin delivers that news as shown in the preview. Ciara will tell him about what happened to Victor. Meanwhile, Justin, who knows about the suspected frame of Ben by Victor and Xander, urges Victor to do the right thing regarding Ben and come clean about the frame-up. Also on Friday, Princess Gina aka “Hope Brady” (Kristian Alfonso) squirms as John questions her about “Steve” and Stefano tests Kristen’s loyalty.