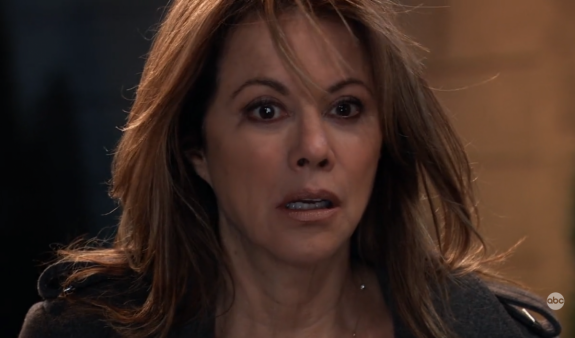 General Hospital spoilers tease that Alexis Davis (Nancy Lee Grahn) will soon get a visit from her not-so-dead nephew Nikolas Cassadine (Marcus Coloma) and learn the whole story of his “return from the dead” in an upcoming episode of GH!

GH Spoilers: Nikolas Cassadine, Now Having The Codicil To Mikkos Cassadine’s Will, Must Have Alexis Davis Do Some Legal Work

Although it was not absolutely certain that Ava Jerome (Maura West) had turned over the codicil to Mikkos Cassadine’s (John Colicos) will to Nikolas the night he saved her from drowning at Wyndemere Castle, he will get it. He had to meet certain conditions that he may not have agreed to for her to give it to him, but by the time he meets with Alexis, he should have it.

One would think his saving Ava’s life would take the place of meeting any conditions she may have had for her giving him the codicil! She had wanted to get revenge on him along with Valentin Cassadine (James Patrick Stuart) but now they should be even; he could have just let her drown, after all!

Nikolas will tell the whole story to an astounded Alexis Davis, although much of the visit will be reconnecting of nephew and aunt. However, as Sonny Corinthos (Maurice Benard) noted to Carly Corinthos (Laura Wright) when she told him about Nikolas being alive, he was a fugitive and unless it is past the statute of limitations for the crimes he committed, he will need some legal help! He had tried to fake his own death previous to being “killed” by Valentin on Cassadine Island, and he had some of Hayden Barnes’ (Rebecca Budig) diamonds with him from her mother’s necklace.

However, the remainder was returned to the police when her mother, Naomi Dreyfus (Robin Riker) was arrested. She confessed to stealing a diamond necklace intended for auction by the Feds, although Hayden really stole it and Nikolas sold one of the separate diamonds from the necklace. Ava Jerome (Maura West) also found out Nikolas poisoned his grandmother’s tea from reading her diary, when they were on Cassadine Island together when he was shot by Valentin – if Helena Cassadine (Constance Towers) was telling the truth in her diary!

GH Spoilers: Nikolas Cassadine Will Need To Get The Estate Paperwork Fixed

After all, if she knew she was being poisoned, why did she continue drinking it until she died? He had also shot Hayden, putting her into a coma at one point and made Shawn Butler, (Sean Blakemore) who had been Sonny’s enforcer after Jason Morgan (Steve Burton) “died” the fall guy with him still being in prison. Hayden didn’t remember being shot after she came out of the coma. This is probably the crime that Sonny alluded to that caused Nikolas to become a fugitive.

Nikolas will also need to get the estate paperwork fixed to change it back from Valentin being the heir to himself, with Spencer Cassadine (Nicolas Bechtel) to inherit after Nikolas is gone, like it was before Valentin came into the picture. That will of course be another reason for him to see Alexis, possibly with his mother, Laura Collins (Genie Francis) since she has Spencer’s guardianship, Nikolas having been presumed dead. Spencer should be the next family member besides Alexis to reunite with Nikolas!