The Young and The Restless Spoilers: Phyllis Tries To Distract Chance Away From Abby 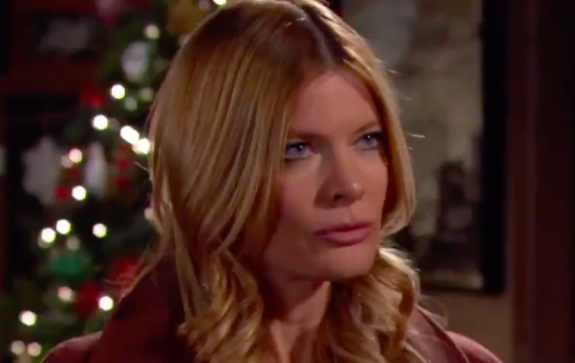 The Young and the Restless spoilers tease that Phyllis Summers (Michelle Stafford) will try to distract Chance Chancellor (Donny Boaz) away from Abby Newman (Melissa Ordway) in upcoming episodes of The Young and The Restless!

The Young and the Restless Spoilers – Phyllis Newman Wants To Nip Chance Chancellor And Abby Newman’s Budding Romance In The Bud!

Phyllis wants to nip Chance and Abby’s budding romance in the bud not just to get a chance with Chance for herself (which she won’t – he is totally annoyed and turned off by her) but also to get back at Abby for firing her from The Grand Phoenix!

She constantly tries to get into Chance’s business, and even tried to insinuate that she already knew all about Chance and Adam Newman’s (Mark Grossman) apparent fiasco in Las Vegas and asked him if Abby knew about it! This happened at the New Year Eve’s party at Society, and he was totally exasperated with her because of it, he constantly has to swat her away like an annoying fly in his face!

Phyllis may not actually know or even be able to guess what happened in Las Vegas, but viewers of The Young and The Restless can bet that she will try the same thing on Abby that she did on Chance, and insinuate that Chance is trying to hide something from her that happened in Vegas, and that Adam was involved in it, especially since she is mad at Adam for trying to get her to seduce Nick Newman (Joshua Morrow) so Adam could get Chelsea Lawson (Melissa Claire Egan) back – which looks like it is happening, but no thanks to Phyllis! In fact, she told Nick what happened and he told Chelsea but broke up with her anyway!

Phyllis definitely has two talents – or perhaps we should say, dubious gifts – poking her nose into the business of others where it does not and never will belong, and breaking up not only her own relationships but those of others! No wonder Phyllis has the reputation of being trouble with a capital T!

Phyllis will do anything to get back at Abby, and actually back at both Abby and Chelsea, although it was Abby who fired her. But more than anything else, she wants to get her control of The Grand Phoenix back. It was her hotel; she founded it and she had it built.

Then Abby and Chelsea swooped in and swiped it out from under her in a hostile takeover, and Phyllis in a sense conned them into giving her the job of security director at the hotel, then Abby got Chance to look over her security system she’d installed and find that she’d made changes to it through a back door into the hotel Wi-Fi so she could look in each guest’s room!

Then she hired a bunch of actors to claim their rooms were robbed and had a bunch of fake jewelry made up to substantiate the evidence, therefore faking grounds for dismissal and firing of Phyllis! (Apparently, Wisconsin is not a no-fault firing state). Phyllis went to Amanda Sinclair (Mishael Morgan) to sue Abby for wrongful termination but Amanda didn’t take the case. So now she will hit at the heart and try to break up Chance and Abby before their romance has even a chance to start!