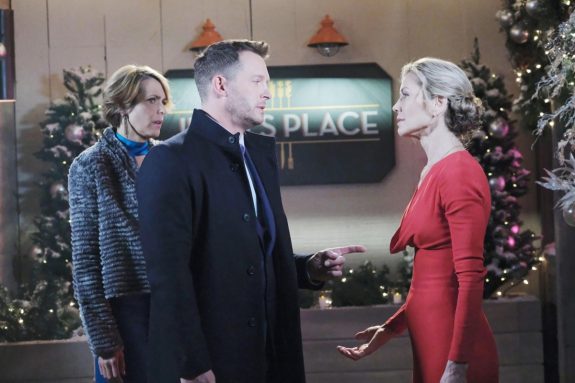 Days of Our Lives (DOOL) spoilers for Tuesday, January 7, tease that Kristen DiMera (Stacy Haiduk) will put the next phase of her plot in motion. She’ll manipulate Gabi Hernandez (Camila Banus) and hope it gets her a step closer to the victories she’s fighting for. DOOL fans know Kristen is hoping to get control of DiMera Enterprises and help Lani Price (Sal Stowers) reclaim her happiness.

DOOL Spoilers: Kristen DiMera Will Put The Next Phase Of Her Plot Into Motion

Of course, Kristen also wants to win over Brady Black (Eric Martsolf), but that could take some time. This Gabi manipulation is something Kristen can make happen right now, so she’ll take great pleasure in her deception and trickery. Kristen will feel like she’s getting her new bestie closer to revenge and bliss with Eli Grant (Lamon Archey).

Days Of Our Lives Spoilers: Will Comforts Ben About Losing His Last Appeal

However, Lani will land in a tricky situation on Tuesday. Eli just won’t believe that anyone else was behind the Gabi Chic vandalism. He’ll confront Lani about why she threw that plant pot and smashed the store’s window. Days spoilers say Lani will have to wiggle out of this difficult situation, so she’ll spin her story and hope she doesn’t blow her plan.

Days Of Our Lives Spoilers: Ciara Brady Will Hope For Some Positive Updates

Days of Our Lives spoilers say Ciara will hope for some positive updates, but she’ll definitely be fearful. Brady Black (Eric Martsolf) will also be worried for Victor in Tuesday’s episode. He’s been known to spar with Victor a lot over the years, but he loves his granddad and certainly isn’t ready for him to die.

Thankfully, Days of Our Lives spoilers say Victor will pull through sooner or later. He suffered a stroke and will need time to recover, but he’ll be given that chance. As for Ciara, she’ll still have to worry about Ben Weston (Robert Scott Wilson) and getting him off the hook for a crime he didn’t commit.

Justin Kiriakis (Wally Kurth) will do everything he can to help Ciara, but there are bigger curveballs than he could ever imagine coming up! We’ll keep you posted as other Days news and rumors emerge. Stay tuned to DOOL and don’t forget to check back often for the latest Days of Our Lives spoilers, rumors, updates and news.