Days Of Our Lives Spoilers: Will Comforts Ben About Losing His Last Appeal 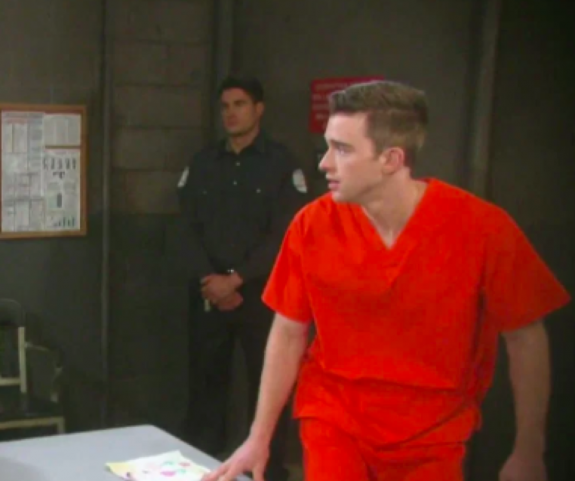 Days of Our Lives spoilers tease that Will Horton (Chandler Massey) will comfort his new friend Ben Weston (Robert Scott Wilson) about losing his last appeal on upcoming episodes of Days of Our Lives!

Ben will be devastated. He doesn’t even care that much what happens to him, but he is extremely worried because he won’t be there to help and protect his girlfriend, Ciara Brady (Victoria Konefal) and who is going to look after her when he’s gone? Hope Brady (Kristian Alfonso) was starting to “slip” even before his arrest, but then no one knows yet that she is literally not herself, having been implanted with a device that apparently regenerated the control chip in her brain that turns her into Princess Gina Von Amberg.

When he hears from Ciara that Victor Kiriakis (John Aniston), her grandfather, who their case had depended on being able to prove that he and Xander Kiriakis (Paul Telfer) killed Ben’s sister, Jordan Ridgeway (Chrishell Stause) and set Ben up has had a major stroke, he will really feel that all hope is lost! His new friend and former “victim” Will Horton (Chandler Massey) will comfort Ben the best he can.

As for Will, he knows he’ll be in prison a long time but doesn’t care, since he can’t forgive himself for hitting his mother-in-law Adrienne Kiriakis (Judy Evans-Luciano) with his car and killing her. But he really hates that Ben is getting the short end of the stick, believing him to be innocent of the murder of his sister.

He totally believes that Victor and Xander could have set him up for it, because he’s got lots of experience with both of them, having lived in the Kiriakis mansion for a long, long time and seeing all kinds of things going on there that was covered up! He especially expects the worst out of Xander, although he knows that Victor is capable of some pretty bad things as well! Will knows there has to be some piece of evidence the police missed in Jordan’s murder or some piece of evidence that was planted at the scene.

Days of Our Lives Spoilers: Ben Weston May Actually Be Messed Up

Will is a reporter and he has learned to investigate things as a part of his job! Ben may actually be so messed up that he’ll be in tears, even though he will try to hide it. Even though technically Ben is now on death row, that doesn’t mean that there is a row of cells in the prison that inmates awaiting execution are moved to, with the implication that Will and Ben will still share their cell until and if Ben is taken away to the room where he will die if something doesn’t happen to prevent it really quickly!

Will might even have Ben in a hug with Ben crying on his shoulder, telling him it’s not over until the fat lady sings, and he hasn’t seen the fat lady come on stage yet!