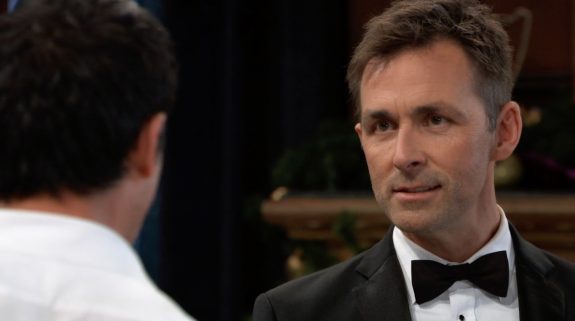 General Hospital’s Charlotte wants to know if Peter went to see what was going on downstairs. Peter says he didn’t. Peter tells her he as a child would hide and only hear half of the conversations making it worst.. says ppl are going to do what they’re going to do; best thing you can do is let him; Nina and Valentin are still going to love her even with no wedding; their love for you is more important; everything will be better in the morning.

Maxie tells Peter that she can’t say this to Lulu but Nik isn’t the nice Cassadine that he used to be. Maxie tells Peter she thinks Liesl Obrecht (Kathleen Gati) knew about this. Maxie also doesn’t think Nina will marry Valentin.

General Hospital’s Trina Robinson (Sydney McKayla) and Cameron Webber (William Lipton) are in the park. Trina wants to know what Cameron is going to do now that he’s free from community service. Trina accuses Cameron of being hung up on Jocelyn. Cameron denies it and tries to deflect. Trina thinks Jocelyn and Dev will be a couple soon. Trina tells Cameron that Dev doesn’t want to talk to anyone at school besides Jocelyn.

Cameron is upset that Trina told Jocelyn that Dev is into her. Trina and Cameron agree to go to the winter prom if they don’t have another date. Cameron agrees to make it a date. Jocelyn texts that they are on the way. Cameron and Dev go to get skates. Jocelyn tells Trina that Dev wasn’t into their kiss.

General Hospital’s Nik tells a Laura & Lulu how dangerous Valentin was; so had to lay low: couldn’t just come back; had to find a weakness: a way to stop Valentin; I wanted to tell you how much I missed you; please tell me you understand why I had to stay away!

Laura slaps Nik and tells him what he has put his son through with this lie. Lulu and Kevin Collins (Jon Lindstrom) doesn’t say a word as Laura tears into Nik. Laura figures out that Nik was the man in the mask at the Halloween party. Nik says he had to bring Valentin down before the truth came out. Nik says he won and it’s finally over. Ava tells Nik it’s time, they are getting married tonight.

General Hospital’s Valentin tells Nina how much he loves her. Valentin is a better person with Nina in his life. No matter how much Nina hurts Valentin she will always be his love. Valentin says he has never manipulated Nina. Valentin mentions how everyone else has manipulated Nina and wonders how he is the bad guy. ‘

Ava wants Valentin arrested. Everyone stares at Ava. Valentin goes to Charlotte’s room and picks her up. Lulu tells Valentin he’s not taking Charlotte with him. Jordan Ashford (Briana Nicole Henry) thinks they need to take Valentin in for questioning.