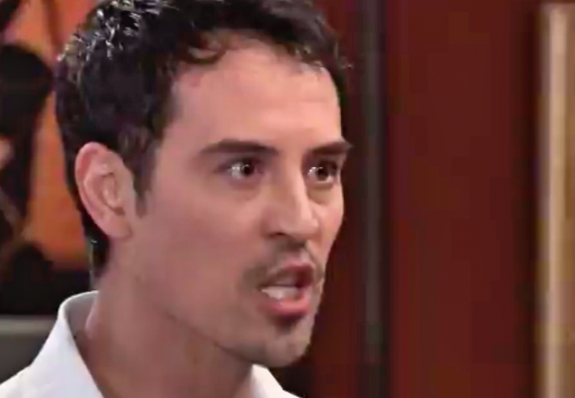 General Hospital spoilers tease that Laura Collins (Genie Francis) will interrupt Nikolas Cassadine (Marcus Coloma) as he is making a cryptic phone call, and as any nosy mother would do, she’ll wonder who he’s calling and maybe what it’s about if she hears certain details! Maybe that’s where her daughter Lulu Spencer (Emme Rylan) gets her “reporter’s instinct!” And General Hospital fans will be just as nosy and wonder who he’s talking to and why!

Even though Nikolas told Jasper Jacks (Ingo Rademacher) that Hayden Barnes (Rebecca Budig) was unreachable and he couldn’t even leave a message, causing him concern that something untoward had happened to her, Nikolas told him she probably went off the grid for safety’s sake, since Valentin Cassadine (James Patrick Stuart) had threatened her and Nikolas had overheard.

He probably gave her an untraceable phone, otherwise known as a “burner phone” to keep in touch with him on, but if he did, why hasn’t she contacted Dr. Hamilton Finn (Michael Easton) to check on Violet Barnes (Jophielle Love)? However, Nikolas may have told her not to make contact until he contacted her and told her the coast was clear, and this could be what Laura overhears!

What Will Nikolas Cassadine Tell His Mother If She Asks Questions?

Laura doesn’t even know that Nikolas and Hayden are still legally married, and that is some more legal paperwork that will have to be done; Alexis Davis (Nancy Lee Grahn) appears to perhaps be getting lots and lots of legal business from her family in the next few months or so!

Hayden certainly doesn’t want to be legally tied to Nikolas, nor he to her! If she’s going to come back to Port Charles and her daughter, then that will be one of the first things that will be taken care of, along with authenticating the codicil, getting the Cassadine Estate and Cassadine Industries back, and getting Spencer Cassadine (Nicolas Bechtel) back out of his grandmother’s legal guardianship and back under Nikolas’ and of course invalidating any declaration of death concerning Nikolas himself! Spencer needs to reunite with his father too! If Laura asks questions, and they aren’t too specific he will probably just tell her he is talking to someone about all these legal matters, and if she does overhear a good bit of it he will have to explain about Hayden!

Valentin will have to be neutralized as a threat before any of these legalities can be taken care of, and if he calls Hayden he will be giving her those kind of updates and telling her to hang tight wherever she is hiding out until he contacts her again. Eventually father and son and mother and daughter will be together, but it may just take a little more time for the legal wheels to move against Valentin!

After all, sometimes the courts get backed up and it can take a few months to get a court date, although with the police commissioner herself witnessing Nikolas bringing a soaking wet, unconscious Ava Jerome (Maura West) through the door at Wyndemere Castle at Valentin’s would-be-but-wasn’t-wedding, and Ava undoubtedly telling Curtis Ashford (Donnell Turner) and Commissioner Jordan Ashford (Briana Nicole Henry) that Valentin pushed her, and even Charlotte Cassadine (Scarlett Fernandez) possibly ratting out her own father, he’s probably already under arrest awaiting trial by the time Laura interrupts Nikolas’ phone call!