General Hospital Spoilers: Lulu Investigates Dustin’s Past – Will She Be Shocked Over What She Learns? 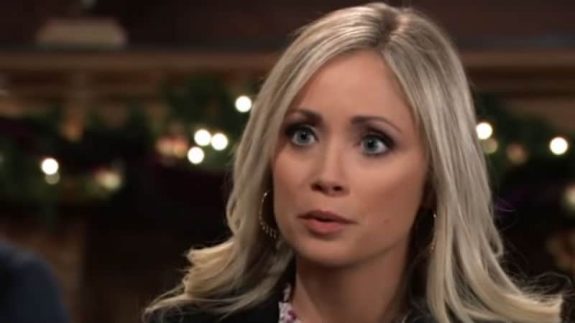 General Hospital spoilers tease that there will be an obstacle out of Dustin Phillips’ (Mark Lawson) past that causes trouble in his and Lulu Spencer’s (Emme Rylan) increasingly serious relationship, and she will fish for information on his past because of it in an upcoming episode of GH!

General Hospital spoilers say a blast from one of their pasts comes back, and they are forced to confront it – and it looks like the blast will be from Dustin’s past! This could be a face from the past – possibly a female one – or a past mistake, or even someone unsavory he had run from, like Brooklynn Ashton (Amanda Setton) currently is! Whatever the obstacle is, he, and maybe he and Lulu together, will have to confront it.

General Hospital viewers, however, have noted that Dustin gets a nervous look in his eyes when he encounters law enforcement or private investigators! Could he have something to hide in his past that could endanger his job as a teacher? Could he be in witness protection and someone he squealed on have tracked him down?

General Hospital Spoilers: Chances Are, He’s Not In Witness Protection

Chances are, he’s not in witness protection. If he were, he would have nothing to fear from law enforcement or private investigators. They would be go-to guys for him for protection if someone he squealed on found him. Therefore, he shouldn’t get that nervous look in his eyes around people like Curtis Ashford (Donnell Turner)!

However, with the way the Port Charles School System seems to feel their teachers have to be perfect, never having made mistakes, and being for the right types of people and against the wrong types of people (in their opinions, at least!) it wouldn’t take much for them to find fault with the least bit of an error in judgement in a teacher’s past, or a mistake the teacher may have made that caused an even temporary legal problem; maybe even a false accusation by someone that went down in court records somewhere!

That would explain his nervousness about Curtis; how does Dustin know if the school system has an account with him or not and uses him to do background investigations on employees? For that matter, Dustin could have had some financial problems in the past and be afraid a bill collector might catch up to him, which could also be something the school system may view with disdain and take serious action regarding!

GH Spoilers: Could Dustin Phillps Have Fled An Abusive Spouse Or Girlfriend?

Men don’t like to admit it, but there are battered husbands and boyfriends just like there are battered wives and girlfriends. Dustin could have an obsessive and abusive ex that he may have even changed his identity and moved far, far away to escape and made a new start in Port Charles. Abusive women are not as common as abusive men, but then many men are too proud to admit it so it may be more common than would be thought.

Abusers of either sex can be either verbally or physically abusive, and if this is what happened to Dustin in his past, it would account for his nervousness around Curtis, wondering if he’d been led into a trap by his abusive ex and that she had hired Curtis to hunt him down, complete with fake girlfriend’s mother committing “dateus interruptus” on the Haunted Star! Dustin actually tried not to laugh at Laura Collins’ (Genie Francis) walking in on them in bed, but when he found out Curtis was a PI that was a different story! Whatever comes blasting out of his past, Dustin’s karma may be on the way back to bite him!