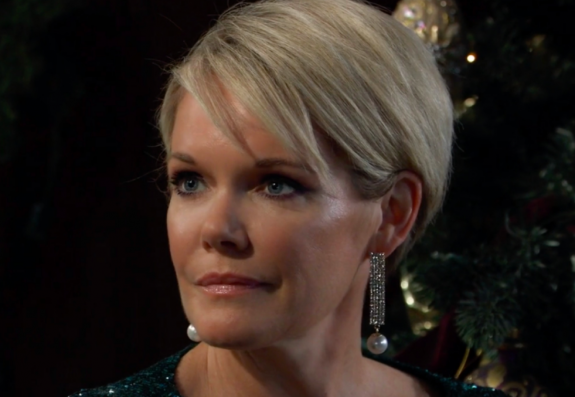 General Hospital (GH) spoilers for Tuesday, January 7, tease that Ava Jerome (Maura West) will be eager to wed Nikolas Cassadine (Marcus Coloma). GH fans know Ava just delivered the wedding shocker, which is part of her deal with Nikolas. Ava mentioned that certain terms had to be met for Nik to get his hands on the codicil. Now that she’s done her part, it’s time for Nikolas to do his and say “I do.”

Laura Webber (Genie Francis) will look uneasy as Ava hopes she’ll stay for the ceremony. That goes for anyone else who wants to watch Ava take the next step in her plan! As for Nina Reeves (Cynthia Watros), she’ll be ready to get the heck out of Wyndemere. She’ll try to dodge Jasper “Jax” Jacks (Ingo Rademacher), Jordan Ashford (Briana Nicole Henry) and Curtis Ashford’s (Donnell Turner) attempts to help.

General Hospital Spoilers: Lulu Investigates Dustin’s Past – Will She Be Shocked Over What She Learns?

Nina will insist that she doesn’t need someone to hold her hand; she just wants to get out of that house! Of course, Valentin Cassadine (James Patrick Stuart) is hoping to do the same since he just tried to take Charlotte Cassadine (Scarlett Fernandez) out of her bed. He insisted they had to leave, but Maxie Jones (Kirsten Storms) stepped up to stop him.

Peter August (Wes Ramsey) will undoubtedly intervene if Valentin starts hurling threats at Maxie. This will eventually become a man-to-man faceoff that ends with Valentin punching Peter in the gut. Maxie will come along and make a stunning discovery later. It looks like Maxie may find Peter unconscious or at least suffering on the floor.

General Hospital Spoilers: Carly Corinthos and Sonny Corinthos Will Be At A Crossroads

Other General Hospital spoilers say Carly Corinthos (Laura Wright) and Sonny Corinthos (Maurice Benard) will be at a crossroads. Carly’s betrayal hurt Sonny deeply, but she felt she did what she had to do. On Tuesday’s GH episode, Sonny will wonder what’s next for them. They’ll call a truce of some sort and hope they can get their marriage back on track sooner or later.

Across town, Anna Devane (Finola Hughes) will be in exactly the right place at exactly the right moment. Tuesday’s preview video shows the aftermath of an unsettling situation. It seems like Felicia Scorpio (Kristina Wagner) may find herself in danger, but perhaps Anna will be there to thwart an attack or some other terrible dilemma.

It appears Hamilton Finn (Michael Easton) may comfort Felicia while Mac Scorpio (John J. York) gets the full scoop from Anna. Whatever the case, Anna will assure everyone that she’s going to get answers. She won’t rest until she uncovers the whole truth, but there could be trouble if this ordeal ties back to Peter in some way.