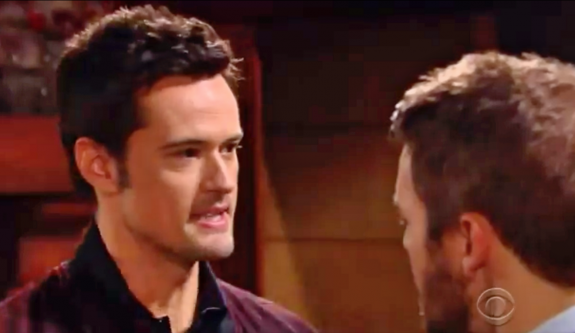 Liam Spencer (Scott Clifton) was stunned on ‘The Bold and the Beautiful’. But fans of this stellar steamer know that B&B pushes the plot and so Thomas Forrester (Matthew Atkinson) looked down as his underestimated nemesis and threatened him. Boom!

And with the dialogue that was mostly stated by the ever-electric character who Atkinson portrays with chilling glare, Liam fully confirmed his worst fears. Through his blazing arrogance, Atkinson’s highly villainous character may have given Liam an unnecessary advantage

The Bold and the Beautiful Spoilers: Shauna Has Serious Discussion with Ridge – Tired of Him Bouncing Between Her and Brooke?

As is true in any competition, a revealing game strategy isn’t wise. But in so doing Thomas has provoked Liam to fight even harder for the people he loves. Meanwhile, Thomas continues to use loathing as his motivation.

Thomas believes that Liam is a nerdy, computer geek. Maybe so. But this perceived weakling has the love of two incredible women and is a great father to two wonderful young girls.

Liam also has everyone’s respect, whereas Thomas is held in high esteem by no one. Ridge Forrester (Thorsten Kaye) is blinded by paternal instinct. Zoe Buckingham (Kiara Barnes) has what amounts to a crush, that’s more than partially tied to her career comeback hopes.

The Bold and the Beautiful Spoilers: Thomas Questions Liam’s Motives – Hope Gets A Marriage Proposal With A Ultimatum https://t.co/dJCGj8Zgx3 pic.twitter.com/Ji0Xvjm7Cd

Backhanded credit can be given to Thomas for at least being honest with Liam behind closed doors. While Thomas is every negative thing that he stated Liam is, at least Atkinson’s character laid down the gauntlet and stopping lying about his true intentions.

Thomas’ bravado is built on the fact that he’s protected by his father. With that shield, he believes no meaningful consequences will be realized in the future because not have been felt so far. That presumption gives Liam an opening that could prove wide.

By saying that Liam will lose by his own hand, Thomas is also implying that he no longer needs to play games. That’s an important and intriguing twist on the game that has been underway for months.

The Bold And The Beautiful Spoilers – Game Strategy Shifts Dramatically

Thomas’ plans to win Hope and wants Liam to revive ‘Steam’ with Steffy Forrester (Jacqueline MacInnes Wood). So there is no further need to have Zoe keep watch on Thomas to see if he’s changed when he himself acknowledges that he hasn’t. Instead, Liam’s choice will be how to proceed.

Neither Liam nor Steffy want Zoe to be put in danger. So she could either be told what Thomas said, which would put her in a seemingly untenable personal position, or Liam and Steffy will now need to serve as Zoe’s protectors because Thomas’ mental instability is now confirmed.

The next moves made must be precise. Thomas is very dangerous and volatile. While timid in certain past instances, Liam’s helipad heroics proved that he’s no slouch and is a worthy adversary.