The Bold and the Beautiful Spoilers: Tuesday, January 7- Steffy Confronts Thomas About His Threats – Liam Proposes To Hope With A Stipulation 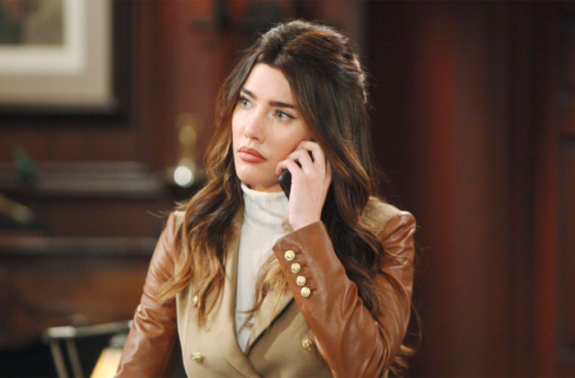 The Bold and the Beautiful spoilers for Tuesday, January 7, tease that Steffy Forrester (Jacqueline MacInnes Wood) will confront her brother Thomas Forrester (Matthew Atkinson). As B&B viewers know, she just found out from Liam Spencer (Scott Clifton) that Thomas made some pretty serious threats against him, and that seems like Thomas is even more unhinged than he was before.

This news, and especially news of Thomas’ threats, came as a shock to Steffy. As B&B viewers know, Steffy truly believed that Thomas was getting better and that he was turning his life around. She thought that he was no longer obsessed with Hope Logan (Annika Noelle), and that he had moved on with Zoe Buckingham (Kiara Barnes).

Well, on Tuesday’s B&B episode, it looks like Steffy will make a beeline for Thomas and call him out on threatening Liam. Of course, since Steffy truly wants to believe that her brother has changed, she’ll probably want to give him the benefit of the doubt and listen to his side of the story. After all, Steffy knows that Liam has his own bias against Thomas.

Chances are, Thomas will likely respond much like he did when Hope confronted him about the threats. B&B viewers will remember that Thomas insisted that Liam blew things out of proportion, and that he was only trying to protect Hope from Liam, since Liam still loves and belongs with Steffy. We’ll see if Thomas gives Steffy the same song and dance, and whether Steffy buys any of it.

Meanwhile, on Tuesday’s new episode of B&B, Liam will make a shocking proposal to Hope. Now that he’s had the big confrontation with Thomas, it looks like Liam isn’t going to take any chances. He’ll want Hope away from Thomas at all costs, since it’s clear to Liam that Thomas still wants Hope and isn’t beyond manipulation to get what he wants.

Bold And The Beautiful Spoilers: Liam Spencer’s Proposal Comes With A Shocking Stipulation

According to B&B spoilers, Liam will propose marriage to Hope, but there will be a stipulation attached. It looks like Liam isn’t going to be willing to have Thomas be a part of their lives any longer – not after the threat that Thomas issued. It appears that Liam will insist that Hope cut her ties to Thomas as a condition for marrying him.

The Bold and the Beautiful Spoilers: Liam Gives Hope An Ultimatum – Must Choose Between Family Or The Forresters https://t.co/RpV31K7LKc pic.twitter.com/RlyVaQH0Bn

Of course, that would mean that Hope would need to fire Thomas as her designer for Hope For The Future, but it also will mean something else. It appears that Liam will want Hope to give up Douglas Forrester (Henry Joseph Samiri) as well, so that Thomas can’t be a part of her life.

The Bold and the Beautiful spoilers indicate that this won’t go over well with Hope, who won’t want to give up legal guardianship of Douglas. And when she balks at Liam’s terms, it appears that Liam will simply say he can’t do this anymore and will walk out on her. It looks like it’s going to be a bad scene, as Liam feels that he’s simply done.