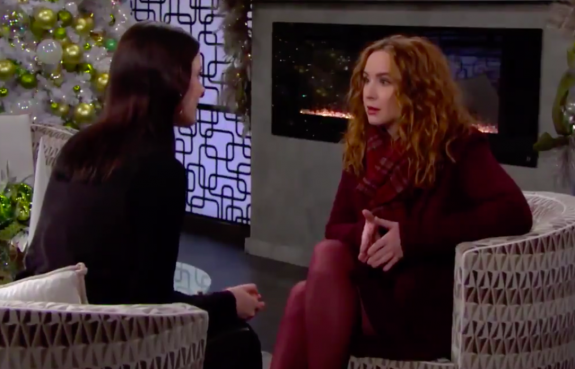 The Young and the Restless (Y&R) spoilers for Tuesday, January 7, tease that Mariah Copeland (Camryn Grimes) will talk with Sharon Newman (Sharon Case) about her problem with Tessa Porter’s (Cait Fairbanks) lie. Sharon will listen and agree that Tessa should have come forward with the truth when Tanner Watts (Chase Coleman) first texted. Sharon will tell her daughter to trust herself, and Mariah will note that she doesn’t know what she’d do with her mom to talk to.

Next on Y&R, at the apartment, Tessa and Tanner will talk. Tessa will say that she needs to think about going on tour with him. Tanner will wonder what’s holding her back, and Tessa will explain that Mariah didn’t know about their marriage until now. Tanner will offer to talk to Mariah, but Tessa won’t think that’s a good idea.

Young And The Restless Spoilers: Chloe Disapproves Of Chelsea’s Decision to Get Back with Adam

Next on Y&R, at Billy Abbott (Jason Thompson) and Victoria Newman’s (Amelia Heinle) place, Billy will see Victoria off for her trip to Singapore. Later, he’ll be alone as the kids are spending the night at the Newman ranch. Billy will get into a self-help article online, but he won’t find it helpful. He’ll then text Amanda Sinclair (Mishael Morgan) asking to meet.

Later, Billy and Amanda will meet up at Crimson Lights. They’ll chat a bit, and she’ll note that she needs a new challenge, which will prompt him to suggest that she figure out what’s going on between them, and why they’re friends when they have nothing in common. Amanda will say that she feels comfortable with him in a way that she isn’t with other people, and that she can’t explain it.

Ultimately, Billy and Amanda will decide to just enjoy what they have together. Phyllis Summers’ (Michelle Stafford) will come up in conversation, and Billy will reveal that they were together at one point. Sharon will see the two of them together and will be surprised that they know each other. Billy will explain the connection with Nate Hastings (Sean Dominic) and how Amanda was Nate’s lawyer after Victor Newman (Eric Braeden) faked his death. Billy will wonder why he decided to hide their friendship.

The Young and the Restless Spoilers: Is Chadam Moving Too Fast? Reboot Isn’t A Guarantee https://t.co/hHC3nVdMud pic.twitter.com/EmYqogc3Pd

Next on Y&R, at the Grand Phoenix, Summer Newman (Hunter King) and Theo Vanderway (Tyler Johnson) will talk. She’ll note that Lola Abbott (Sasha Calle) is surprising Kyle Abbott (Michael Mealor) for his birthday tonight. Theo will needle her about still wanting Kyle, and eventually she’ll accuse him of staying in Genoa City because of Lola. She’ll ultimately get disgusted and leave.

Finally, on Tuesday’s new episode of Y&R, Lola and Kyle will have Society to themselves for Kyle’s birthday. Lola will sweetly give him his original order from the food truck from when they first met. Later, they’ll have a real dinner and they’ll talk about the year they’ve had. Lola will wonder if their honeymoon period is going to end, and Kyle will say they can get through anything. They’ll dance alone in the restaurant.