Days of Our Lives Spoilers: Did Maggie Kill Adrienne While Drunk Driving? Fans Speculate Victor Made Will Take the Blame 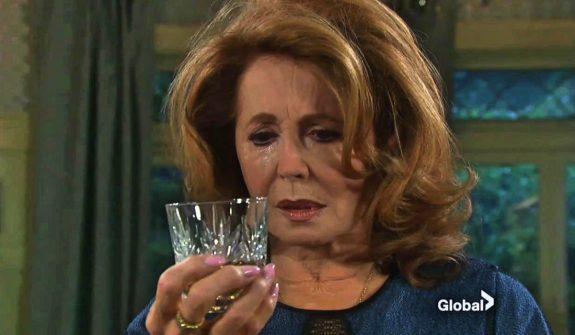 Days of Our Lives spoilers reveal Will Horton (Chandler Massey) might not really be guilty of murder. Is it possible that he was coerced or framed to take the blame? That is what some viewers are thinking. There is a theory that Maggie Horton Kiriakis (Suzanne Rogers) could have gotten drunk and killed Adrienne Kiriakis (formerly Judi Evans).

DOOL spoilers indicate that Will is paying the price for Adrienne’s death. However, fans have a really hard time buying that he killed her. Not only was she his mother-in-law, but they had a good relationship. The whole situation just doesn’t make sense and it doesn’t help that we haven’t even been told any details regarding her death. All we know is that it was a “complicated” story, based on Justin Kiriakis’ (Wally Kurth) words to Jennifer Horton (Melissa Reeves).

Days Of Our Lives Spoilers: Should Hattie And Roman Start A Romance?

It is teased that Maggie has relapsed a few times in the past couple of years. Once, she blacked out and without knowing what happened during the time jump, all we can do is speculate. What if she has continued to dabble in alcohol? It wouldn’t be too far of a stretch considering all the stressful and devastating events that have occurred during the past year.

Days of Our Lives spoilers reveal that someone killed Adrienne. It is also hinted that Will eventually gets released from prison. Either he serves his time, gets early release for good behavior or he is found innocent after being convicted. This has fans speculating on if he is truly guilty of murder.

Days of Our Lives Spoilers: Should Eric Accept Xander In Sarah And Mickey’s Lives? https://t.co/dsMTeH95IF pic.twitter.com/6pxFTHPJwk

Days of Our Lives Spoilers: Victor Kiriakis Mixed Up in This?

It is speculated that Victor Kiriakis (John Aniston) might be responsible. Could he have tried to protect Maggie from prison and had someone else implicated in the crime? Is it possible that he didn’t mind too much about blaming Will since the two didn’t exactly get along. However, would he really go as far as to frame him for Adrienne’s murder?

Maybe that is the big secret Ciara Brady (Victoria Konefal) learns. Victor and Xander Cook’s (Paul Telfer) discussion about imprisoning an innocent man might have nothing to do with Ben Weston (Robert Scott Wislon) after all.