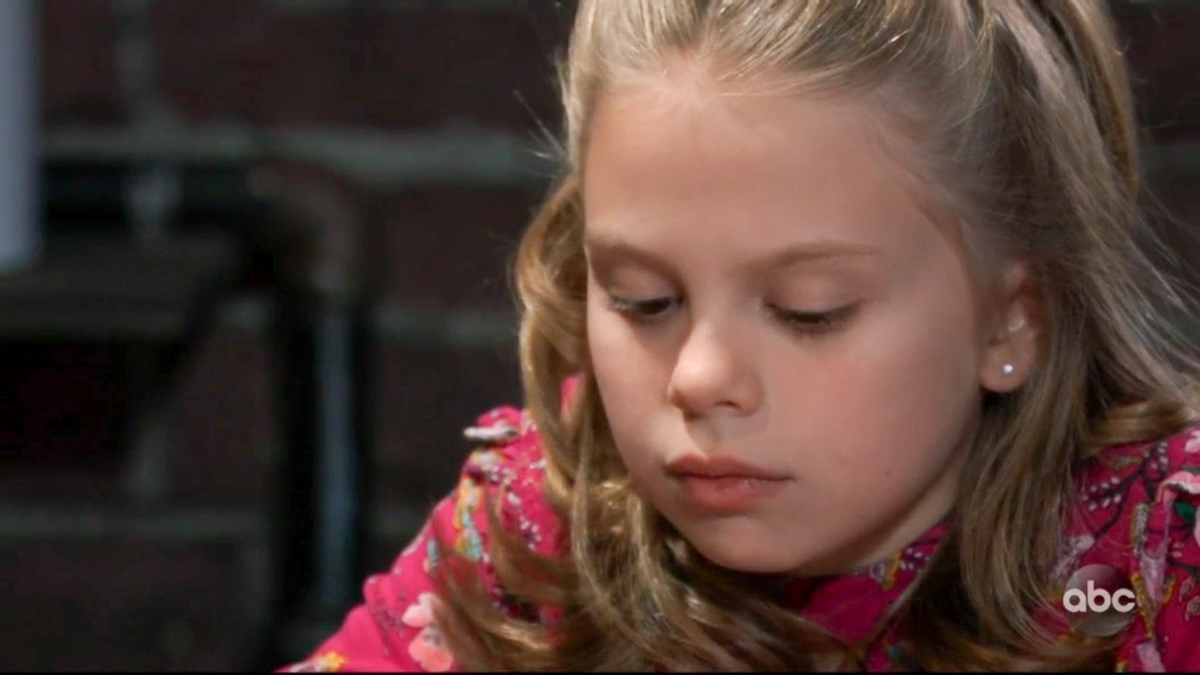 General Hospital spoilers tease that Charlotte Cassadine (Scarlett Fernandez) may have seen her papa, Valentin Cassadine (James Patrick Stuart) push Ava Jerome (Maura West) over the parapet of Wyndemere Castle or heard her splash! General Hospital viewers will recall the shocked look on her face when her “bodyguard” came through the doors carrying a soaking wet Ava!

General Hospital viewers will recall that Charlotte was standing right behind Valentin shortly after he pushed Ava over and she made her splashdown and asked him “What are you doing out here, Papa?” with her mother, Lulu Spencer (Emme Rylan) close behind. Valentin looked properly shocked, not knowing if she had seen the whole thing or not, although one would think if she had she would have addressed it with him right then and there! He made a suggestion to Lulu that it would be a warmer place to look at the stars from the observatory, and Lulu went back inside the castle. However, Charlotte could have heard the splash, because she started to look over the wall into the harbor and Valentin pulled her away and kept walking her away from the scene.

Nikolas kicked the door in and entered, soaking wet with an equally soaking wet Ava in his arms, minus her shoes which probably came off her feet while she was in the water. In addition, she was unconscious. But Charlotte looked more shocked than she should have when she saw Nikolas; she had seen him before. It was the unconscious, soaking wet Ava in his arms that she was shocked at! Of course, she could have wondered why her “bodyguard” saved this lady from drowning but not her!

General Hospital viewers will also recall that after Curtis Ashford (Donnell Turner) took Ava from Nikolas, and Kevin Collins (Jon Lindstrom) was checking her out medically to make sure she was alive, that Valentin asked Peter August (Wes Ramsey) to take Charlotte up to her room, but before he and Maxie Jones (Kirsten Storms) took her up, Valentin knelt down and told Charlotte that everything was going to be okay – twice – and she hugged him, but she had a strange look on her face – nearly identical to Nina Reeves’ (Cynthia Watros) when she has told him something he wanted to hear but it wasn’t what she wanted to say! Could little Charlotte have already learned the fine art of deception without saying a word by letting someone believe what they want to?

General Hospital Spoilers – Has Nina Reeves Been Keeping Another Secret Or Has Lulu Spencer?

Has Nina been keeping another secret, or has Lulu? Or maybe Grandma Laura Collins (Genie Francis) or Great-Aunt Liesl Obrecht (Kathleen Gati)? Has one of them been gradually preparing Charlotte for the eventual arrest of her papa, and the payback he will suffer, and that he’s not the hero she thinks he is? Or has Charlotte herself been the little spy, hearing and seeing her Papa do and say things he shouldn’t, even though one would think with her personality that she would confront her Papa about those things!

Or maybe even Nikolas – maybe he’s been in the tunnels under Wyndemere since he left Jasper Jacks’ (Ingo Rademacher) home, although Ava could have been hiding him as well. It just seems interesting the look she gave when Papa told her it was going to be okay, and the shocked look at the unconscious, wet Ava in Nikolas’ arms that she doesn’t know SOMETHING!