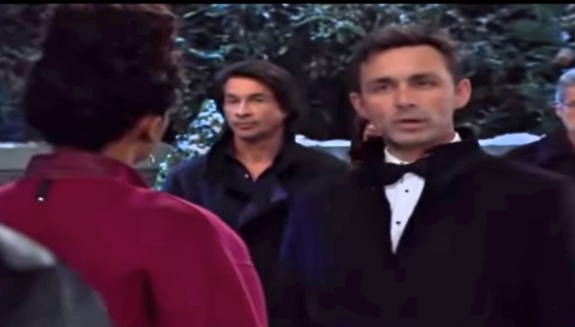 GH Spoilers: Sonny Corinthos Gets News Of An Attack

Carly tells Sonny about Ava Jerome (Maura West) being thrown off the parapet. Sonny asks Carly what comes next for them. Carly tells Sonny they have much more important things to concentrate on. Gladys Corbin (Bonnie Burroughs) joins Sonny and Carly.

One of Sonny’s workers arrives and tells him a truck has been hijacked. Sonny tells him not to worry about the truck but to tell the guard to tighten security. Gladys tries to get more information out of Sonny who put her in her place. Gladys agrees to stay out of it. Carly tells Gladys she’s there because of Mike Corbin (Max Gail). Carly wants Gladys gone. Carly hugs Sonny in support.

General Hospital’s Jasper Jacks (Ingo Rademacher) pours Nina Reeves (Cynthia Watros) a scotch. Revenge tastes worse than Lulu thought. Jordan Ashford (Briana Nicole Henry) asks where Valentin Cassadine (James Patrick Stuart) is, she has a warrant for his arrest. Nina wanted Valentin to own up to everything and give her a reason to stay. Jordan says Nina did the right thing.

Nina wants to be alone and leaves. Jax follows Nina out. Curtis Ashford (Donnell Turner) and Jordan look for Valentin. Jax tells Nina he booked her a suite at the Metrocourt. Nina is taking a bath and planning to sleep for a week.

General Hospital’s Ava interrupts Nik and his family to inform him it’s time for their wedding. Lulu Spencer (Emme Rylan) cannot believe this is happening. Lulu says Ava is blacking Nik and they will get him out of this. Kevin Collins (Jon Lindstrom) tries to talk Ava out of this marriage. Laura Webber (Genie Frances) says Ava is holding the codicil over Nik’s head. Laura says she has tried to help Ava. Laura tells Nik he waited and came home for a power grab and not his family.

Nik thinks they will realize he and Ava are a good match. Lulu refuses to stay for the wedding. Ava says Nik and she was close at one time. Ava has forgiven Nik. Ava says they will be married before the end of the night. Laura approaches Ava and demands to know how long she has known Nik was alive. Kevin talks to Nik about hurting his family. Kevin gives Nik a phone and tells him to call his son. Laura tells Ava she is worried about Nik in a new way. Laura realizes that Nik was tormenting Ava.

Laura says her son is acting like a Cassadine. Ava thinks when the shock passes she will realize Ava and Nik are a good match. Laura refuses to stay for the wedding. Laura thinks this is a mistake. Laura joins Kevin and Laura. Kevin says Nik just tried to call Spencer Cassadine (Nicholas Bechtel). Nik wants Laura to stay for the wedding, she tells him no. Ava joins Nik at the altar and they are married.

General Hospital’s Valentin is ready to leave with Charlotte Cassadine (Scarlett Fernandez). Maxie Jones (Kirsten Storms) tries to stop Valentin. Peter steps in and tells Valentin he’s not taking her anywhere. Valentin asks Maxie to take Charlotte out of the room and Valentin punches him and leaves with Charlotte. Lulu finds Maxie and Peter. Peter says they need to go home. Lulu plans to have Valentin arrested for kidnapping. Maxie finally agrees to go home. Charlotte explains to Valentin that Nik is her secret bodyguard. Charlotte grabs Nina’s flowers and they leave. Lulu wants Valentin charged with kidnapping. Lulu realizes Valentin and Charlotte are in the tunnels. Valentin and Charlotte make it to the park where they run into Anna.