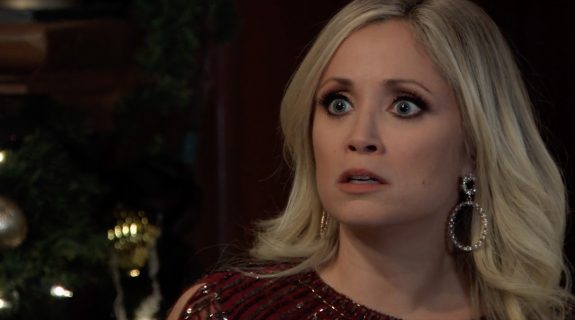 General Hospital (GH) spoilers for Wednesday, January 8, tease that Gladys Corbin (Bonnie Burroughs) will get a little surprise from Sonny Corinthos (Maurice Benard). Since Sonny hasn’t been too happy about Gladys’ nosiness, this surprise may not be a pleasant one. Sonny will take Gladys out of the kitchen and catch her off guard with something, so Gladys will have to wiggle out of trouble.

GH Spoilers: Gladys Corbin Will Get A Surprise From Sonny Corinthos

Next, a family meeting will get underway about Charlotte Cassadine (Scarlett Fernandez). Naturally, Valentin Cassadine (James Patrick Stuart) won’t be present for it since he was just arrested! Lulu Spencer (Emme Rylan) will think it’s time for a clean break. She’ll tell Laura Webber (Genie Francis) and Nina Reeves (Cynthia Watros) that Valentin’s never getting anywhere near Charlotte ever again.

Nina may object to that – and maybe even Laura, too. Valentin is a horrible human being, but Charlotte adores her papa and may fall apart without him. This isn’t a decision that needs to be made while everyone’s all riled up.

Of course, Valentin won’t be seeing much of Charlotte anyway if he goes down for the charges against him. He’ll be in the PCPD interrogation room looking as smug as ever on Wednesday. Valentin will suggest that Robert Scorpio (Tristan Rogers) is going to follow the law and let him go. You can bet Robert will do everything in his power to keep Valentin locked up, but we’ll see how long it sticks!

Jason Morgan (Steve Burton) will also pay Robert a visit in Wednesday’s GH episode. He’ll want to make a deal, so Robert will be all ears. This may involve Sam McCall (Kelly Monaco) and the problem she’s facing at the moment. Sam can’t be around Jason or else she’ll be thrown behind bars again.

There may not be much Robert can do about that, but he can at least help Jason take down Peter August (Wes Ramsey). It could be an important first step toward wiping the slate clean for Sam. Over with Sam and Alexis Davis (Nancy Lee Grahn), they’ll be floored when Carly Corinthos (Laura Wright) admits Nikolas Cassadine (Marcus Coloma) is alive and well. Carly will bring them up to speed on how Nik resurfaced to derail the wedding last night.

Other General Hospital spoilers say Ava Jerome’s (Maura West) gun will go missing. She’ll wake up in bed and discover it’s not under her pillow, which will lead to Nik’s shocker. Nikolas will aim the gun at Ava and wonder if she’s looking for this.

Of course, Nikolas isn’t going to shoot Ava, but he’ll have fun messing with her anyway. General Hospital spoilers say the morning after their nuptials is sure to be an eventful one! We’ll give you updates as other GH news and rumors emerge. Stick with the ABC soap and don’t forget to check back often for the latest General Hospital spoilers, rumors, updates and news.