The Bold and the Beautiful Spoilers: Wednesday, January 8 – Liam Walks Out After Failed Marriage Proposal – Thomas Freaks Over Liam’s Ultimatum To Hope 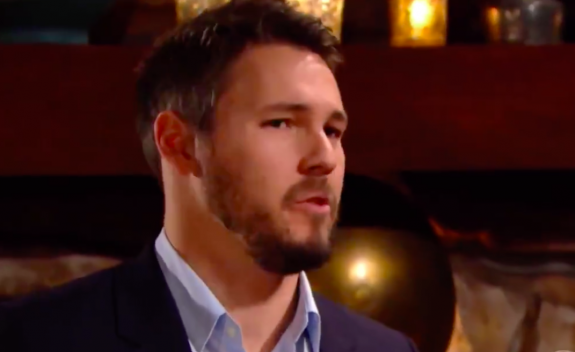 The Bold and the Beautiful spoilers for Wednesday, January 8, tease that Liam Spencer (Scott Clifton) will wait anxiously for Hope Logan’s (Annika Noelle) answer to his monumental request. As B&B viewers know, Liam has just proposed to Hope, but that proposal came with a big stipulation: Liam asked Hope to cut all ties to Thomas Forrester (Matthew Atkinson).

Liam wants to move forward with Hope and Beth Spencer (River Davidson and Madeline Valdez), but in order for that to happen, he thinks that Hope needs to end her collaboration with Thomas at Forrester Creations. That would mean that Thomas can’t design for Hope on her Hope For The Future line. And that’s something that Hope could probably live with.

But Liam also wants Hope to end her co-parenting relationship with Thomas, which would mean not being a mother to Douglas Forrester (Henry Joseph Samiri). As B&B viewers know, Hope looked astounded by this condition, and it looks like her answer to Liam’s proposal will not be what Liam wants to hear at all.

The Bold and the Beautiful Spoilers: Liam or Douglas? Who Will Hope Choose?

Bold And The Beautiful Spoilers: Hope Logan Heartbroken As Liam Spencer Walks Out

The Bold and the Beautiful spoilers indicate that Hope will either say an outright no to Liam’s marriage proposal, or she’ll hesitate long enough that Liam will get the picture pretty quickly. At any rate, Liam will walk out of the cabin in frustration, leaving Hope behind begging for him to come back.

Other B&B spoilers indicate that Thomas will soon find out about Liam’s marriage proposal and the terms that he outlined, and Thomas won’t be happy about it. He’ll apparently freak out when he hears that Liam wants to remove him completely from Hope’s life. Thomas has gone to great lengths to remain in Hope’s orbit, so he’ll probably be furious to learn that Hope might be considering Liam’s terms.

The Bold and the Beautiful Spoilers: Scott Clifton Says Thomas And Liam’s Fight Was Just As Intense As It Looked https://t.co/ygq0txp4dj pic.twitter.com/NocluWxfaS

Meanwhile, on Wednesday’s new episode of B&B, Ridge Forrester (Thorsten Kaye) will have a strong opinion to share with Steffy Forrester (Jacqueline MacInnes Wood). As B&B viewers know, Ridge and Steffy are currently at the cliff house, and Ridge has been having some cute moments with his granddaughter Kelly Spencer (Zoe Pennington).

Well, it seems that Ridge will want to share his thoughts on Steffy’s love life with her. As B&B viewers know, Ridge recently met with Carter Walton (Lawrence Saint-Victor) at Forrester Creations and during their conversation, Ridge noted that he was glad that Liam hadn’t yet proposed to Hope. Apparently, Ridge still believes that Liam and Steffy love each other, and it looks like he’ll say the same to Steffy.

That might give Steffy food for thought, although she’s firmly under the belief that Liam’s ensconced in a relationship with Hope now. But given that Liam’s marriage proposal to Hope isn’t going to go as planned, Ridge’s words might become more meaningful to Steffy in the days to come. Ongoing B&B spoilers indicate that Liam and Steffy will end up kissing soon, so her dad’s opinion just might stick with her.