The Young and the Restless Spoilers: Wednesday, January 8 – Chloe Reels From Chelsea’s News – Devon Wants To Hire Chance – Adam Reaches Out To Victor 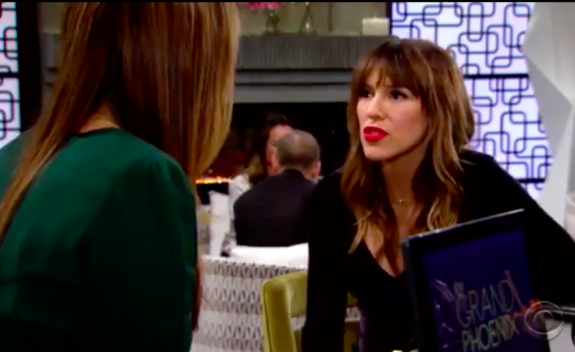 The Young and the Restless (Y&R) spoilers for Wednesday, January 8, tease that Lola Abbott (Sasha Calle), Summer Newman (Hunter King), and Jack Abbott (Peter Bergman) will surprise Kyle Abbott (Michael Mealor) with a gathering at Jabot for his birthday. Summer will give Kyle a framed photo of them as children, while Jack’s present will be coming soon. Kyle will be about to make a wish over his cake when Theo Vanderway (Tyler Johnson) appears.

Theo will remark that he’s not upset at being uninvited to the festivities and he’ll say that he has a gift for Kyle too, as the latest social media numbers are excellent. That will make Jack happy, and Kyle will sarcastically say that it’s the best gift ever. Lola will then take Kyle out into the hallway and tell him that he should let it go, just like she did when Summer’s gift bothered her. They’ll go back inside as Theo is admiring the photo.

Next on Y&R, Chloe Mitchell (Elizabeth Hendrickson) will talk with Billy Abbott (Jason Thompson) at the Grand Phoenix. Chloe will joke that Billy is back to the man they all know and love, and Billy will privately wonder which Billy that would be. Chloe will share that she and Kevin Fisher (Greg Rikaart) are having a baby, and he’ll congratulate her.

The Young and the Restless Spoilers: Summer Interferes In Theo’s Plan – Lola Left In The Dark

Soon, Chelsea Lawson (Melissa Claire Egan) will shrive and Chloe will go talk with her while Billy nearly texts Victoria Newman (Amelia Heinle) but texts Amanda Sinclair (Mishael Morgan) instead. Chelsea will be thrilled to hear Chloe’s baby news, and Chelsea will share that she and Nick Newman (Joshua Morrow) have split up and that she’s back with Adam Newman (Mark Grossman).

Chloe will freak out and note that Adam has broken her heart more than once, and she’ll balk at the idea that Adam has changed. Chloe will say that Adam is a sociopath, and she’ll have Billy come over to talk some sense into Chelsea. Billy and Chelsea will chat, and Chelsea will explain the pull between herself and Adam. Billy will say that it’s her life and she should choose how to live it. Afterwards, Chloe will be upset by how Billy handled things.

Next on Y&R, Elena Dawson (Brytni Sarpy) will arrive at Society for her takeout order, but Abby Newman (Melissa Ordway) will say that it’s been canceled and reveal that Devon Hamilton (Bryton James) is sitting in the dining room. Elena and Devon will sit and talk about Elena’s idea to put a clinic in one of the New Hope buildings for the residents. Devon will be into the idea.

Later, Abby will talk with Devon while Elena’s on her phone. The topic of the search for Colin Atkinson (Tristan Rogers) will come up, as well as Amanda, who Abby will say has been a model guest at the Grand Phoenix. After a little more talk about the search for Colin, Abby will mention Chance Chancellor (Donny Boaz) and how he’s starting a security firm. Devon will then call Chance to offer him a job trailing Amanda.

The Young and the Restless Spoilers: Adam Has Been Humbled – Genoa City Takes Notice https://t.co/WIRQSF8OOS pic.twitter.com/1M4HKpxmku

Y&R Spoilers: Adam Newman Has A Request For Victor Newman

Next on Y&R, Adam will visit with Victor Newman (Eric Braeden) at the ranch. Victor will say that he knows about Nick and Chelsea’s breakup, and he’ll guess that Chelsea and Adam are back together, which Adam will confirm. Victor will note Chelsea’s history of rebounding. Adam will say that he came to discuss Connor Newman (Judah Mackey), and that he wants Connor to have a good relationship with Victor, so he doesn’t want them excluded from holidays.

Talk will eventually turn back to Chelsea, and Victor will point out that she’s a con artist and a thief, but Adam will tell him to stop. Adam will say that he’ll break every rule in the book to protect his family, and that he learned that from Victor. Victor will wish his son good luck. Finally, on Wednesday’s new episode of Y&R, at the penthouse, Adam will regroup with Chelsea and fill her in on Victor agreeing to include them in family events.