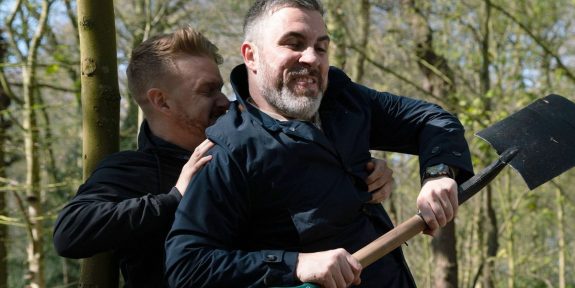 Coronation Street is set to revisit Rick Neelan’s (Greg Wood) murder story, according to the showrunner Iain MacLeod. He revealed Gary Windass’ (Mikey North) past will haunt him. Adam Barlow (Sam Robertson) will secretly conspire against him and he’ll eventually find his way, along with the authorities, to the place where Rick was buried.

Viewers may recall that Gary had a dark showdown with loan shark Rick in the woods last summer, which led to the latter’s death. Rick’s death is the second on Gary’s list, since the first one was unintentionally causing the death of Rana Habeeb (Bhavna Limbachia) during the Underworld roof collapse. This storyline set up Gary as the newest villain in the cobbles.

Gary was then able to convince Maria Connor (Samia Longchambon), the mother of his child, that Rick was the one who caused the Underworld roof collapse. Gary may think that he’s managed to get away with murder for now but that won’t be the case for long.

“Well, having ridden the storm that ensues at Christmas, Gary finds himself in a relatively stable and happy place with Maria, and then something incredibly difficult happens that throws it up in the air,” MacLeod teased.

He continued, “Meanwhile, Adam is secretly conspiring against him, which will threaten to lead Adam, and therefore the authorities, to Rick’s final resting place.

“Whether that will actually happen or not is still to be seen – but that will precipitate a big, explosive story at the time we do our episodes around the Britain’s Got Talent week in May,” he added.

“We’re resisting the urge to dig up Rick’s body, because it feels as if everyone is expecting us to. So, I hope we’re playing, in a good way, with the audience’s expectations around that,” he said.

Elsewhere, Sarah Platt (Tina O’Brien) and Adam Barlow (Sam Robertson) is planning a spring wedding this year. If this does happen, will Gary Windass come in the way of the couple’s planned nuptials? Viewers know that Sarah is Gary’s former girlfriend and Adam is his arch-enemy. With Adam secretly conspiring against him and Gary’s history with the bride to be, there’s a possibility that this wedding could end in disaster.

Be sure to tune in to catch up on everything happening on Corrie right now. Come back here often for the latest Coronation Street spoilers, updates, news, and rumors!