Days Of Our Lives Spoilers: Greg Vaughan And Linsey Godfrey Return To DOOL! 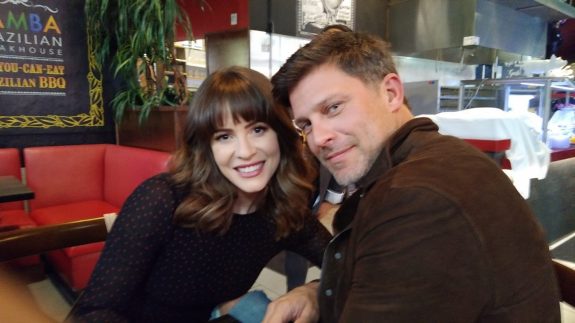 Linsey and Greg left the show briefly when their onscreen personas, Dr. Sarah Horton and Eric Brady took their baby daughter, Mackenzie Horton (the May twins) to Boston, Massachusetts for specialized cancer treatment for neuroblastoma.

They have been gone since November 25 and will be returning during the week of January 13. They should be onscreen again by January 17, and will return to more drama among their families with one family member having had a stroke!

Days of Our Lives Spoilers: Is Evan Jordan’s Baby Daddy? Shocking Revelation Ahead

There Was A Paternity Battle Over Baby Mackenzie Horton

As Days of Our Lives viewers will recall, there was a paternity battle over baby Mackenzie. Sarah was just getting ready to tell Eric she was pregnant with his child when the love of his life, Nicole Walker (Arianne Zucker) and her daughter, Holly Jonas (Harlow and Scarlett Mallory), who had been presumed dead, were revealed to be alive and Eric went to Chicago, Illinois to bring them back to Salem.

Sarah released Eric from their relationship to be with Nicole, and nearly had an abortion because she didn’t know what to do. She changed her mind, and Xander Kiriakis (Paul Telfer) who had fallen in love with her claimed the baby as his and faked a paternity test showing he was the father, but the forgery was later discovered and Nicole told Eric the truth after keeping it a secret for over a year, at Sarah’s behest.

General Hospital Spoilers: Is It Time For Lulu And Dustin To Get Serious? https://t.co/ahWiKlQx2O pic.twitter.com/t6vec7qgh5

Sarah Horton’s Stepfather, Victor Kiriakis Has Had A Major Stroke

Sarah’s stepfather, and Xander’s uncle, Victor Kiriakis (John Aniston) had a major stroke this week and this may be a factor for the return of Sarah and Eric, and hopefully, Mackenzie. She will want to support her mother Maggie Kiriakis (Suzanne Rogers) through this difficult time as Victor recovers, and Xander, as she has come to return his closeness.

Eric will also return to provide emotional support as he is able, and both will take concern for Maggie and how she gets along after the shock of her husband requiring brain surgery to remove a large clot that caused his stroke. It may be a difficult time for all as spoilers say they will have more bad news regarding Mackenzie.