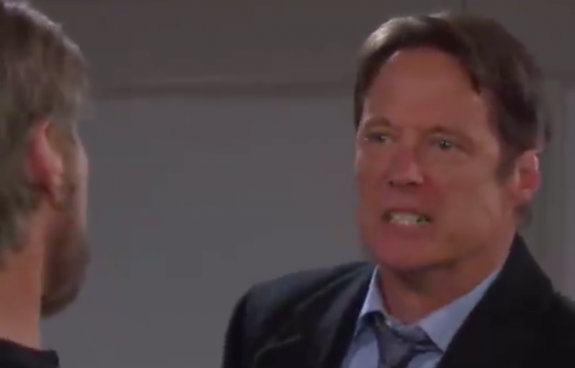 Days of Our Lives (DOOL) spoilers for Thursday, January 9, tease that Ciara Brady (Victoria Konefal) will get a stern warning from Xander Kiriakis (Paul Telfer). He won’t want Ciara anywhere near Victor Kiriakis (John Aniston), so he’ll be sure to say so! Xander will snarl about the damage Ciara’s done and insist she needs to steer clear of Victor from now on.

DOOL Spoilers: Ciara Brady Will Get A Stern Warning From Xander Kiriakis

However, Ciara won’t be willing to give up on Ben Weston’s (Robert Scott Wilson) freedom. She believes Victor set Ben up with Xander’s help, so she’ll remain hopeful that he can recover and give her answers. Ciara also loves and cares about Victor’s well-being, so she’ll be going through a rough time on Thursday.

Days Of Our Lives Spoilers: Greg Vaughan And Linsey Godfrey Return To DOOL!

Other Days spoilers say Brady Black (Eric Martsolf) will go along with Nicole Walker’s (Arianne Zucker) lie. Nicole told Kristen DiMera (Stacy Haiduk) she’s in love with Brady and that Brady’s in love with her, too. She wants Kristen to believe they’re in a real relationship, but it’ll take Brady backing her up to convince Kristen it’s true.

Days of Our Lives spoilers say Brady won’t think this is such a great idea, but he’ll ultimately trust Nicole’s judgment and hope for the best. As for “Steve Johnson” aka Stefano DiMera (Stephen Nichols), he’ll get an earful in Thursday’s episode. Jack Deveraux (Matthew Atkinson) will blast “Steve” for not showing up at Adrienne Kiriakis’ (Judi Evans) funeral, but he’ll be most upset over how “Steve” treated Kayla Brady (Mary Beth Evans).

Days Of Our Lives Spoilers: Jack Deveraux Will Blast “Steve”

“Steve” won’t think it really matters since Kayla found her happy ending with Justin Kiriakis (Wally Kurth). He’ll be unbothered by Kayla’s pain, so Jack will feel like this is an invasion of the body snatchers – and it sort of is! DOOL fans know Stefano’s memories were implanted in Steve, so he’s certainly not quite himself at the moment.

Later, Kristen will be surprised by a visitor that drops by. It appears “Steve” will arrive in hopes of finding out just how much Kristen values DiMera family loyalty! Days of Our Lives spoilers say “Steve” will play some mind games as he tests Kristen and prepares to reveal himself.

It sounds like some exciting scenes are on the way. We’ll give you updates as other Days news and rumors emerge. Stay tuned to DOOL and don’t forget to check back often for the latest Days of Our Lives spoilers, rumors, updates and news.