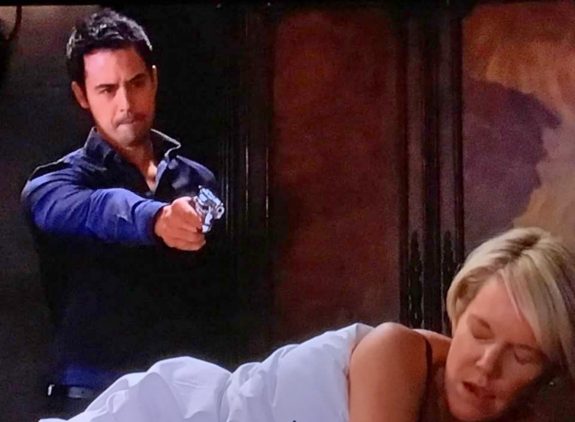 Sam McCall (Kelly Monaco) arrives and kisses Jason. Carly leaves them alone for a few minutes. Alexis Davis (Nancy Lee Grahn) arrives and interrupts. Carly tells Sam and Alexis that Nik is alive. Alexis questions where Nik is and Carly says Wyndemere she thinks. Alexis leaves to go to Spoon Island and tells Sam to wrap this up soon and don’t let it happen again.

Sam wonders why Carly has brought them there and risked her parole. Carly wants Sam and Jason to strategize. Carly just wants to help them to get over this parole officer’s head. Jason can think of someone who might help. Carly updates Sonny on Sam and Jason’s visit. Sonny pulls out the article Gladys gave him. Jason arrives at the PCPD and Sam joins him. Sam and Jason Have a proposal for Robert.

Laura questions how long Nina has known about Nik. Nina explains finding the ring in Ava Jerome’s (Maura West) room. Laura says the son she knew is getting further and further away from her. Lulu has called Diane Miller (Carolyn Hennesy) to try to get full custody of Charlotte. Maxie leaves to go to work but wants Lulu to reconsider the petition.

General Hospital’s Valentin speaks with Robert Scorpio (Tristan Rogers) at the PCPD. Valentin believes Robert will turn him loose. Valentin demands to know why Nik wasn’t arrested. Martin arrives at the PCPD and Robert leaves. Martin tells Valentin he didn’t get to talk to Charlotte but she’s ok, Nina is there. Valentin is sure this is Helena Cassadine (Constance Towers) is torturing him beyond the grave.

General Hospital’s Nik points a gun at Ava and demands the codicil. Ava takes the gun from Nik and tells him she has decided to keep the codicil since they don’t have a prenuptial agreement. Ava tells Nik she hid the codicil where he can’t find it. Nik has nothing without Ava. Ava yells for Liesl Obrecht (Kathleen Gati). Liesl offers to stay at Wyndemere to help protect Ava from Nik. Liesl tells Nik to restrain himself from hurting Ava. Liesl warns Nik that Valentin may try to get rid of him again. Alexis arrives and is shocked to see Nik.

Alexis cannot believe that Nik married Ava. Alexis is upset with Nik for what he has done to his son. Alexis wants the real story of this marriage. Liesl speaks to Nina who wishes she had made a different choice after last night. Nik isn’t happy that Ava wants Liesl to stay there. Ava will give Nik the codicil if he signs the postnuptial agreement.

General Hospital’s Gladys tells Sonny how good it is to pretend to be Dev Corbin’s (Ashton Arbab) grandmother. It’s been wonderful staying at Sonny’s house for the holidays. Sonny gives Glady a new car for her trouble. Sonny tells Gladys the car is full and ready to go. Gladys is sorry for overstepping. Gladys asks about Donna Corinthos’ (Ella and Emma Hulen) christening. Gladys wants to stay until then. Gladys gives Sonny some information on a new treatment for Mike Corbin (Max Gail).