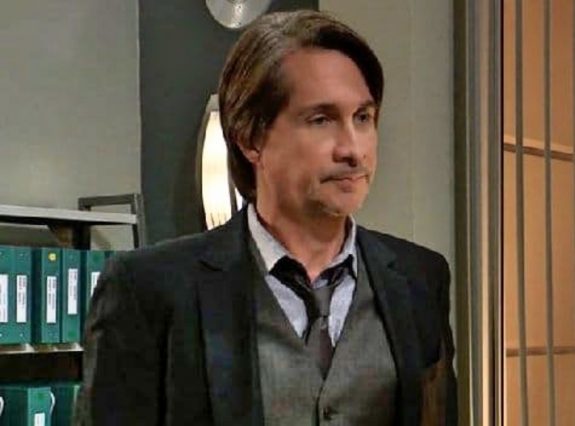 General Hospital (GH) spoilers for Thursday, January 9, tease that Hamilton Finn (Michael Easton) will have an important meeting. He’ll interrogate Jasper “Jax” Jacks (Ingo Rademacher) about Hayden Barnes (Rebecca Budig) and hope he can get the real story out of him. Now that Nikolas Cassadine (Marcus Coloma) has come forward, Jax may admit that Nik’s the reason Hayden left town.

GH Spoilers: Hamilton Finn Will Have An Important Meeting

Regardless, Jax will assure Finn he’s going to do everything he can to bring Hayden home. Unfortunately, those will be empty words to Finn at this point. He’s got a little girl who misses her mommy, so the promise of trying to find Hayden probably won’t be enough to pacify him.

General Hospital spoilers say Finn will make his outrage crystal clear and worry about poor Violet Barnes (Jophielle Love). He’ll hope for the best, but he’ll know this is a terrible situation. Next, Anna Devane (Finola Hughes) will grill Peter August (Wes Ramsey) – most likely about her recent discovery. She found out that Peter as at a DVX front company called Eurotech at the same time as the gunman.

Of course, Peter will dodge any questions he can and offer bogus answers when need be. He’ll play the part of a nice guy – and Anna will want to believe it. Even so, Anna’s suspicions should remain deep down. As for Julian Jerome (William deVry), he’ll get hit with a shocker on Thursday. Ava Jerome (Maura West) will pay her brother a visit and admit she married Nikolas as part of her sweet revenge.

General Hospital Spoilers: Julian Jerome Fears That Ana Jerome Is In Over Her Head

Julian may fear that Ava’s getting in over her head here. He’ll probably warn Ava to be careful, but she’ll be brimming with confidence. Over with Brad Cooper (Parry Shen), he’ll be taken aback when Michael Corinthos (Chad Duell) shows up at GH with “Wiley Cooper-Jones” (Erik and Theo Olson). Brad will ask if everything’s OK, but he should grow even more concerned when Michael admits “not really.”

While Michael explains the latest crisis, Jason Morgan (Steve Burton) and Sam McCall (Kelly Monaco) will have some explaining to do, too. They took quite a gamble by showing up at the PCPD together, so they’re counting on Robert Scorpio (Tristan Rogers) to at least hear them out. Fortunately, Robert will indeed listen to their proposal – and it seems he’ll approve of what they’ve cooked up.

General Hospital Spoilers: Carly Has A Change Of Heart About Mike Going On A Road Trip https://t.co/Ho4EaZj0JI pic.twitter.com/CeQOoZ52sy

GH Spoilers: “JaSam” And Robers Scorpio Has It Out

As “JaSam” and Robert hash out a deal, Carly Corinthos (Laura Wright) will worry about Sonny Corinthos’ (Maurice Benard) plans. Thanks to Gladys Corbin (Bonnie Burroughs), Sonny’s been reading up on a new study involving magnetic waves. He’ll tell Carly this could be the first step toward a cure for Alzheimer’s, so he’ll definitely have high hopes that this could help Mike Corbin (Max Gail).

Carly will want Sonny to curb his optimism here. She’ll fret about this being another dead end that wastes precious time, but Sonny will be adamant that it could work. Since we know a road trip’s coming up for Sonny next week, he may end up hitting the road with Mike to prepare for this study.