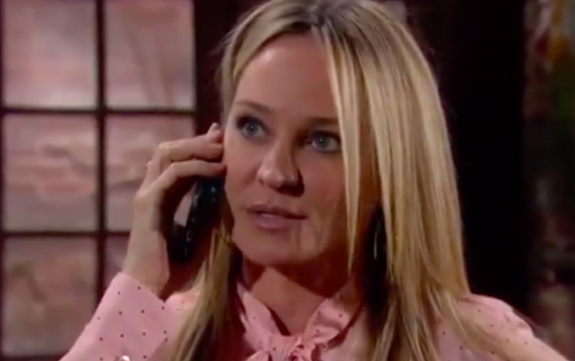 The Young and the Restless (Y&R) spoilers for Thursday, January 9, tease that Devon Hamilton (Bryton James) and Nick Newman (Joshua Morrow) will talk at Society. They’ll discuss business before talk turns to Nick’s breakup with Chelsea Lawson (Melissa Claire Egan). Phyllis Summers (Michelle Stafford) will arrive in time to overhear about the breakup, and after Devon goes, she and Nick will discuss the situation.

Phyllis will be proud of Nick for making the decision, and she’ll reiterate her opinion that Chelsea doesn’t deserve him. She’ll also take the opportunity to talk down Adam Newman (Mark Grossman), who is now with Chelsea. Talk will soon turn to old times, and the two will reminisce about working together and about Cassie Newman (Camryn Grimes).

Phyllis will tell Nick that she still wants ownership of the Grand Phoenix, and that her relationship with Summer Newman (Hunter King) has improved. They’ll pay each other compliments and end up having a good time together as friends.

Next on Y&R, at Adam’s penthouse Chelsea will arrive with her belongings from Nick’s place. Adam will hope that she feels good about moving in there. He’ll then take a call from Connor Newman’s (Judah Mackey) principal, and they’ll set a meeting to discuss what’s in Connor’s best interests. This will impress Chelsea, and she’ll say that she admires his fierce protectiveness when it comes to Connor.

They’ll say that they’ve missed each other, but Chelsea will note that she doesn’t want to put herself or Connor through any more pain. Adam will promise that they can build a life together. They’ll head upstairs where they’ll kiss and eventually make love.

Young And The Restless Spoilers: Sharon Newman Worries About Her Upcoming Tests

Next on Y&R, at Crimson Lights, Sharon Newman (Sharon Case) will be talking to herself, which Rey Rosales (Jordi Vilasuso) will notice, and he’ll wonder if she’s doing ok. Clearly worried about her upcoming mammogram and ultrasound, she’ll kiss him and say that she wishes that they could freeze this moment in time. Mariah Copeland (Camryn Grimes) will arrive as Sharon is rubbing her temples, and she’ll update her about Tanner Watts’ (Chase Coleman) visit to the apartment.

Devon will then arrive at Crimson Lights, and he and Mariah will chat on the patio. Devon will note that Tanner’s people reached out concerning Tessa Porter (Cait Fairbanks). Mariah will divulge that Tessa was married to Tanner, and that she’s letting Tessa decide what to do. Later, Rey will return and ask Mariah if Sharon seems ok to her.

Next on Y&R, at the apartment, Mariah will come home to find Tessa and a romantic dinner setup, all for Mariah’s birthday, which is tomorrow. Mariah will ask about Tanner, and Tessa will say that she’s going on tour, but that she wouldn’t go if she thought it would harm their relationship.

The Young and the Restless Spoilers: Adam Has Been Humbled – Genoa City Takes Notice https://t.co/WIRQSF8OOS pic.twitter.com/1M4HKpxmku

Mariah will be reassuring and say that she wants this for Tessa. They’ll kiss happily, and later Tessa will give Mariah a journal filled with her own writings. Tessa will say that taking Mariah’s journal was a violation, and she wants Mariah to know her in the same way.

Young And The Restless Spoilers: Sharon Newman Gets Terrible News

At the clinic, Sharon will be anxious and will soon learn that her mammogram was inconclusive as to whether her lump is fluid or solid, the latter of which would indicate cancer. Sharon will then have an ultrasound and will wait for the radiologist to come talk with her.

When he arrives, he’ll tell her that the lump is solid, and that she needs to have a biopsy and a consultation with an oncologist. Finally, on Thursday’s new episode of Y&R, Sharon will examine her biopsy paperwork in shock.