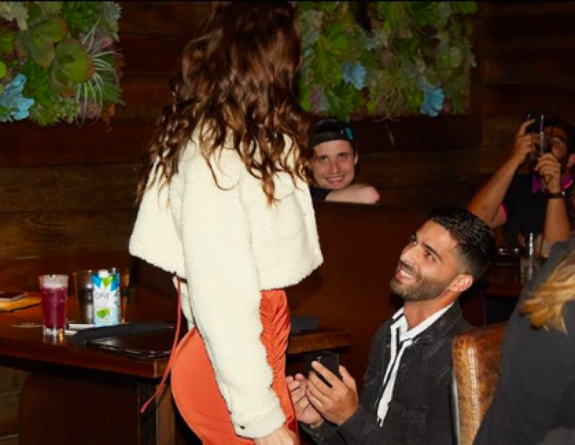 Congratulations is in order for Jason Canela, formerly known as Arturo Rosales on “The Young and the Restless.” Canela announced that he’s now engaged to his girlfriend, Janaina Reis.

The actor shared the news on Instagram. He shared a photo of him down on his knees with a ring in his hand. The caption said, “I truly believe we can make each other as happy as we made this kind individual the moment I proposed to you for the rest of our lives 😍🤪💯 @janaarc ❤️”

The Young and the Restless Spoilers: Nikki Against ‘Shick’ Reunion – Gives Sharon A Warning

“I could not have chosen a better partner to do life with ❤️ #SheSaidYes well, technically she said let me think about it 👀 but I’m pretty sure she was joking lmao… I hope she was joking hahah ha @janaarc were you joking?” he continued.

Young And The Restless Spoilers: The First Time They Met

The couple has been together since October 2017. Canela shared that they met on the beach and he immediately noticed how gorgeous she was.

“So I started talking to her and to this day we have a great relationship. She’s become a very big part of my life,” he said.

The American actor is made a name for himself thanks to his roles in telenovelas. Canela, who is of Cuban descent, appeared in serials like “Dónde Está Elisa” and “Cosita Linda.” He made his debut in English TV after joining the cast of “The Young and the Restless” as Arturo Rosales.

‘The Young and the Restless’ Spoilers: Nick Is Single And Looking For Romance – Is Phyllis A Perfect Match? https://t.co/GWPOYpDXV2 pic.twitter.com/09Mll6tHPO

He joined the “The Young and the Restless” back in February 2018. A year after, he announced that he’s leaving the show with a happy heart. He was happy to call the studio as his second home. He’s thankful for having the opportunity to work with incredible people. He also said he was lucky to form genuine relationships with the likes of Peter Bregman, Melissa Ordway, Jordi Vilasuso, Sasha Calle, and Naomi Gonzales.

“I appreciate each and every single person that makes up part of the Y&R family! Our makeup team, our crew, our security! Without them, there is nothing. The team behind the camera is what makes it all worth it,” he said.