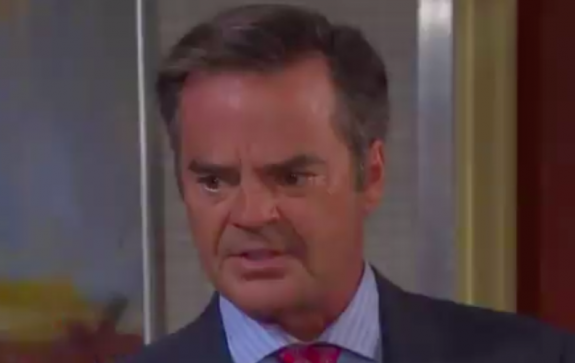 Days of Our Lives (DOOL) spoilers for Friday, January 10, tease that Stefano DiMera aka “Steve Johnson” (Stephen Nichols) will try to figure out if Kristen DiMera (Stacy Haiduk) can be loyal. He’ll put her to the test by asking a few Stefano-related questions and trying to rile her up about him. Kristen’s definitely someone who values family loyalty, so she may lash out at “Steve” for trashing her father.

DOOL Spoilers: Stefano Dimera Will Try To Figure Out If Kristen DiMera Can Be Loyal

Perhaps Kristen will contend that even if she did have helpful Stefano dirt, she certainly wouldn’t give it to “Steve.” Days spoilers say Kristen will convince “Steve” that he can reveal his true identity, so Kristen will be floored by Stefano’s bombshell. Speaking of bombshells, Ciara Brady (Victoria Konefal) is set to face one soon. Before we get to that, Ciara will have to deliver some terrible news.

Ben Weston (Robert Scott Wilson) will get updates on his failed final appeal, so that’ll be tough to hear. Days of Our Lives spoilers Ciara will be heartbroken over this overwhelming setback. Things will look pretty bleak, but Justin Kiriakis (Wally Kurth) won’t give up just yet. He’ll pay a recovering Victor Kiriakis (John Aniston) a visit and count on Vic to tell the truth about setting Ben up.

Days Of Our Lives Spoilers: Victor And Xander Kiriakis Framed Will Horton

However, Victor and Xander Kiriakis (Paul Telfer) actually framed Will Horton (Chandler Massey) on that horrible night, so Victor will have a decision to make. He’ll eventually determine that Ciara needs to know what really went down. DOOL spoilers say Ciara will be stunned by Victor’s confession, which should be the Friday cliffhanger or an exciting shocker for Monday.

Meanwhile, Princess Gina Von Amberg aka “Hope Brady” (Kristian Alfonso) will deal with some drama. John Black (Drake Hogestyn) will get suspicious of “Hope” and “Steve’s” connection, so “Hope” will have to cover her tracks and make John believe there are no secrets. Good luck with that, Princess Gina!