Days Of Our Lives Spoilers: “Steveano” Reveals His True Identity To Kristen 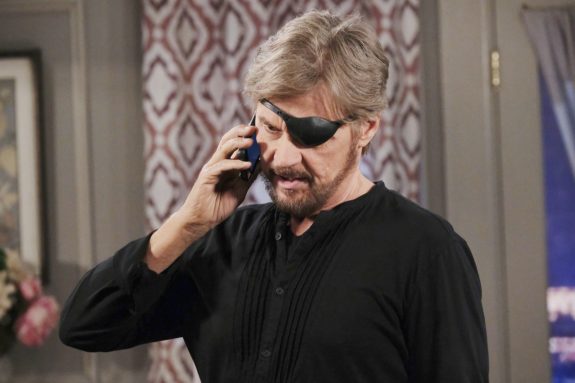 Days of Our Lives spoilers tease that “Steveano” – otherwise known as Stefano DiMera in Steve Johnson’s (Stephen Nichols) body – will reveal his true identity to Kristen DIMera (Stacy Haiduk) in an upcoming episode of Days of Our Lives!

Friday, Stefano DiMera will show up on his daughter’s doorstep in the wrong body, and Kristen will be mystified or perhaps suspicious as to what Steve “Patch” Johnson would want with her.

Days of Our Lives Spoilers: Clyde Wants Ben To Work On A New Plan But Ciara Has An Alternate Solution

She knows who he is, and she knows that he is the now ex-husband of Kayla Brady (Mary Beth Evans) who just showed up in Salem out of the blue on New Year’s Eve, and she knows he is John Black’s (Drake Hogestyn) partner in their private investigation business, “Black Patch”. She also knows that he is an ISA agent and that part makes her suspicious!

Kristen DiMera Will Take Some Convincing

Kristen will take some convincing to believe Stefano when he tries to convince her that he’s her father, but in the wrong body, and will explain how it happened. Stefano’s own body was over ninety years old now, and riddled with cancer, heart problems and diabetes, and there was nothing that Dr. Wilhelm Rolf (William Utay) could do to regenerate it and make it younger and get rid of the cancer and other medical problems. He had to put Stefano’s “essence” in a newer, younger body and Steve’s had happened to be available.

Stefano hated it, but he just had to make the best of a bad situation, the alternative being that the Phoenix would not rise again unless he accepted being put into Steve’s body. He hates Steve but there apparently was no one else available that Rolf could use. When he tries to tell her the truth, and finally it starts to make sense to her, she may have a hard time not laughing at the irony of Stefano inhabiting the body of a man he hates!

Days Of Our Lives Spoilers: Ciara’s Urgent Visit To Will – Sarah Continues To Worry About Mickey https://t.co/qlqHUsdBYs pic.twitter.com/56SqgXwDFd

Stefano will talk to Kristen about things that only the two of them shared and that only the two of them would know. He will do his best to talk in his own voice as well, as much as he can make it his own voice coming from Steve’s body! Once Kristen believes him, she will think it is brilliant for him to masquerade as a person no one would expect him to, although it is really not a masquerade and it is not a disguise.

She may tell him about when she impersonated Nicole Walker (Arianne Zucker) and wonder if another mask like she used would work better for him so he wouldn’t look like Steve, and maybe a voice changer like she used as well so he would sound more like himself. Of course, Rolf would have to be available and not on the run or in hiding for them to work on that. But perhaps Stefano arranged for a secret lab for him elsewhere to work on exactly that!