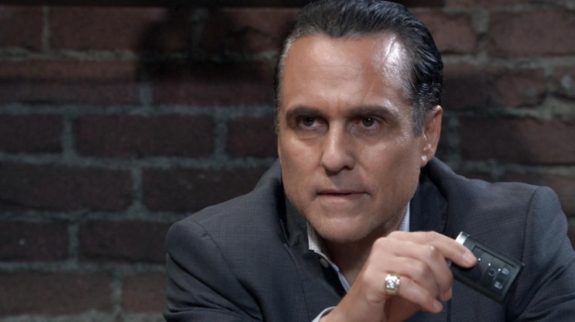 Finn doesn’t want Anna to make herself an accessory to Peter’s crimes. Finn tells Anna she needs to find the line she won’t cross with Peter and go from there. Finn leaves Anna to talk to Peter. Anna tells Peter she has some questions about the man who attacked Andre Maddox (Anthony Montgomery) and Franco Baldwin (Roger Howarth). Anna brings up one of Caesar Faison’s (Anders Hove) companies that employed the hitman.

Peter makes excuses and tries to say Dr. Cabot (Time Winters) may be attacked as well. Anna thanks Peter for answering her questions. Peter says he will prepare himself because he expects Jason Morgan (Steve Burton) will come after him. Anna doesn’t think it is necessary to give the police the information.

General Hospital’s Nina Reeves (Cynthia Watros) and Maxie Jones (Kirsten Storms) are talking at Crimson. Jasper Jacks (Ingo Rademacher) arrives and asks how Nina is. Nina can’t do anything to help Charlotte Cassadine (Scarlett Fernandez). Peter stops by to tell Maxie he has to visit Anna. Maxie brings in the projections Nina and Jax wanted.

Jax assures Nina that she will get through this. Jax is glad to have Nina back at work. Maxie is very upset with Nina when she learns that Jax knew about her plan. Nina says she didn’t want to disappoint Maxie. Maxie wants Nina to be happy no matter who she is with. Jax visits Finn and tells him that Nik was behind Hayden Barnes’ (Rebecca Budig) disappearance.

Maxie tells Nina she is no substitute for her brother but she is there for her. Maxie wants to support Nina. Maxie is upset that she’s done all the work on the magazine and Nina is taking over. Finn needs to find Hayden for their daughter.

General Hospital’s Ava Jerome (Maura West) shows up and tells Julian Jerome (William DeVry) about her wedding. Julian tells her there has been no change in Lucas Jones (Ryan Carnes) condition. Ava is about to have the sweetest revenge. Ava plans to take Nikolas Cassadine’s (Marcus Coloma) fortune. Ava and Julian talk about Wiley and what a wreck Brad has been. Julian says it’s hard being around Brad because Lucas should be there.

Sonny Corinthos (Maurice Benard) arrives at Charlie’s and Ava tells him about her wedding. Julian gets a call from Brad who tells him about the nanny Michael wants to hire. Julian tells Brad it’s a good idea. Sonny questions why Ava would marry the guy who put her in a mental institution. Finn is upset that Jax didn’t say anything before this. Jax has no other ways of getting in touch with Hayden.

Ava tells Sonny she’s not helping Nik, she’s helping herself. Ava says she had what Nik wanted. Ava says this is about power and that is a game she knows how to play. Ava is determined to have the fortune. Sonny says if Avery Corinthos (Ava and Grace Scarola) gets hurt or Ava is murdered, he will be very unhappy. Sonny tells Julian he knows what Julian and Brad talked about after Carly left the other day.

General Hospital’s Carly Corinthos (Laura Wright) looks at the information Sonny has. Sonny plans to get Mike Corbin (Max Gail) into the next trial. Carly believes Mike’s doctors would have mentioned this if it was a viable option. Sonny still wants to try and buy his father some time.

Carly gets a text from Michael. Carly is worried about Brad. Sonny leaves to get his head clear to check about his dad. Michael arrives to talk to Carly. Michael tells Carly he wants to hire a nanny for Brad. Michael says he is worried about Wiley’s safety. Carly will support Michael any way he can.

Carly shows Michael the article Sonny brought home. Carly says nothing can be done to help Mike and Sonny needs to admit that. Mike tells Carly that Sonny isn’t used to giving up control. It’s going to take longer for Sonny to accept this, they just have to be there for him.

General Hospital’s Sam McCall (Kelly Monaco) and Jason Morgan (Steve Burton) are waiting to speak to Robert Scorpio (Tristan Rogers). Diane Miller (Carolyn Hennesy) meets them and asks where they are. Robert walks in and wants to hear the proposal. Robert refuses to help Sam. Robert doesn’t do favors for the mob. Sam tells Robert it’s a trade. Jason says something we want for something you want.

Robert thinks Peter changed his mind. Robert will take care of the parole problem if Jason brings him evidence against Peter. Sam and Jason vow to find the evidence they need. Diane says it might take time to uncover this evidence. Jason will be alright as long as Sam is.

Stay tuned to the ABC soap and don’t forget to check Celebrating The Soaps often for the latest General Hospital spoilers, updates, and news.