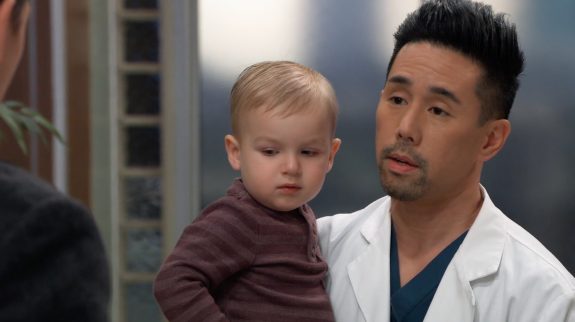 General Hospital (GH) spoilers for Friday, January 10, tease that some drama will break out at Crimson. Lucy Coe (Lynn Herring) will be excited about some proposal she has in mind. Maxie Jones (Kirsten Storms) may point out that Sasha Gilmore (Sofia Mattsson) hurt Nina Reeves (Cynthia Watros) deeply, but Lucy will suggest this is a chance to move forward. She’ll hope to get everyone on the same page.

GH Spoilers: Lucy Coe Will Be Excited About A Proposal She Has In Mind

However, Sasha won’t think this is a good idea at all. She’ll rant that what Lucy calls moving forward, she calls “just plain stupid!” Sasha won’t want to cause any more issues for Nina or create distress for her in any way. Of course, things have changed a bit for Nina lately. She regrets her recent scheme, so she may be able to put herself in Sasha’s shoes and see that stuff can get out of hand.

At GH, Elizabeth Baldwin (Rebecca Herbst) will have some harsh words for Nikolas Cassadine (Marcus Coloma). She’ll blast Nik for not contacting his loved ones since he was alive and well. Nik will be sorry about that, but he’ll feel he did what he had to do for Spencer Cassadine’s (Nicolas Bechtel) sake.

Unfortunately, Nikolas has to much more to be sorry for! He drove Hayden Barnes (Rebecca Budig) out of Port Charles, so Liz will have to find out about that eventually. Over with Brad Cooper (Parry Shen), he’ll tell Willow Tait (Katelyn MacMullen) and Michael Corinthos (Chad Duell) that he’s found the perfect person to help take care of “Wiley Cooper-Jones” (Erik and Theo Olson).

General Hospital Spoilers: Micheal Corinthos is Worried About Brad Not Being Able To Handle Wiley On His Own

Michael’s worried about Brad not being able to handle “Wiley” on his own, so he encouraged him to hire a nanny. Julian Jerome (William deVry) thinks the suggestion is a good one, so Brad will make his selection on Friday. Could it be Brook Lynn Ashton (Amanda Setton) who steps up to help?

Willow’s busy with her position at GH and honestly would be too risky of a choice anyway. Brook Lynn is great with kids, so she would undoubtedly be an ideal candidate. She’ll have some scenes with Nelle Benson (Chloe Lanier) in a couple weeks, so this might be how she ends up in free Nelle’s orbit.

Next, Sonny Corinthos (Maurice Benard) will make himself crystal clear to Julian. He just arrived at Charlie’s Pub and insisted he knows what Julian talked to Brad about on the pier. Sonny doesn’t really have all the facts, but he’ll hope he’s got enough to rattle Julian. He’ll growl that if Julian’s got something brewing, he should think twice.

Finally, General Hospital spoilers say Jordan Ashford (Briana Nicole Henry) will grill Jason Morgan (Steve Burton). She’ll wonder if Jason and Sonny have made themselves an enemy, but Jason may not offer much info. He won’t want to risk getting Sonny in trouble with the law, but you can bet Jordan will keep digging.