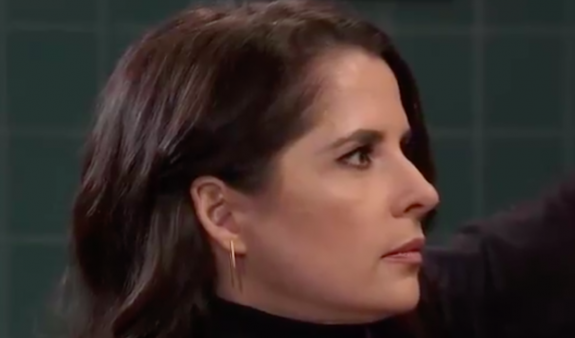 General Hospital Sam McCall’s (Kelly Monaco) has been away from Jason Morgan (Steve Burton) a lot more than she’s been with him since his return. It seems that every time they get close, something pulls them apart and every single time lately, it’s been associated with Shiloh Archer (Coby Ryan McLaughlin). Now, Sam’s parole officer is insisting Sam stay away from Jason or go back to prison. Is she punishing Sam for killing her leader?

General Hospital’s Jason’s record is public knowledge. However, Jason was released because of a loophole and does not have a felony conviction. Jason cooperated with the cops in going after Franco Baldwin (Roger Howarth) but he went back to prison afterward and was released free and clear.

Since Jason’s release was because of a mix up in a federal case, he should have nothing but an arrest record with no convictions. However, even if it was still on his record, the parole board knew about Sam and Jason before she was released, the parole officer should not be able to interfere.

That fact that General Hospital’s Ned Quartermaine (Wally Kurth) helped Sam to get her parole should also have clued the board in on Sam’s relationship with Jason. Shiloh had guards that were members of his group as well as the former District Attorney. Sam’s parole officer being a Dawn of Day member is not the least bit far fetched. Sam killed Shiloh to save Jason’s life, this came out in the trial.

Jason visited Sam frequently while in prison. Obviously, their relationship was not a problem. For the parole officer to be against Sam and Jason, there has to be more to the story with the officer herself and not the actual parole board. Anyone associated with Shiloh would not want Sam to be happy so being a DOD member makes perfect sense.

Sam and Jason deserve some happiness and that means this parole officer needs to go or Sam needs to be proven innocent. However, something needs to give in this predicament and it needs to happen now.