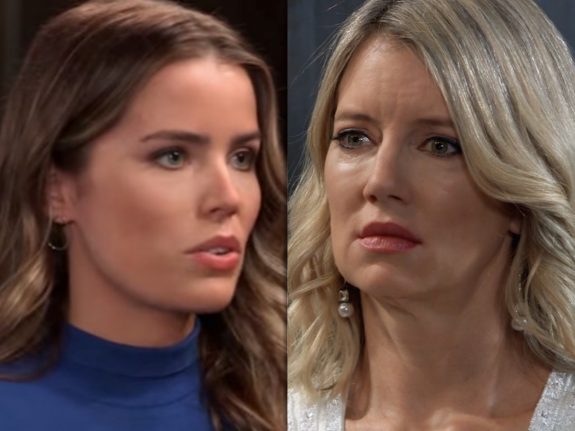 As viewers recall, Nina was furious when she discovered Sasha had been lying about being her daughter. Of course, Valentin Cassadine (James Patrick Stuart) was the mastermind behind Sasha’s impersonation but Sasha took the blame so as not to tarnish Nina’s love for Valentin.

Once Nina and Sasha got close, Sasha became very protective of Nina. She really did come to love Nina, even though they don’t share DNA. But once Nina found out, she cast Sasha out of her life. For a short while, she even pressed charges against Sasha for fraud, although she eventually dropped them.

On New Year’s Eve, Nina ran into Sasha. Nina had obtained proof about Valentin’s involvement and she and Sasha had a heart to heart. Sasha tried to explain that all she wanted was Nina’s happiness and in her mind, Valentine provided that. But Nina hates lies, as is obvious from her reaction once the truth came out. Nina had definitely softened toward Sasha, so does that mean that eventually they may call a truce and even become friends?

General Hospital Spoilers: Ava Is Getting Ready For The Biggest Journey Of Her Life https://t.co/S5pQNDNNWg pic.twitter.com/Wun4Nt20M6

Nina doesn’t forgive easily, but she does know that Sasha was just caught up in Valentin’s scheme. And the fact that Sasha was willing to shoulder all the responsibility has to count for something. But this won’t be an easy reconciliation. Sasha and Nina have a long way to go in order to become friends. Friends may not even be an option, but hopefully they can be in the same room without stress for either of the women.

Will Nina and Sasha ever be able to mend fences? Only time will tell, so stay tuned to General Hospital airing weekdays on ABC. And don’t forget to check back here regularly for all your General Hospital news, information and spoilers!