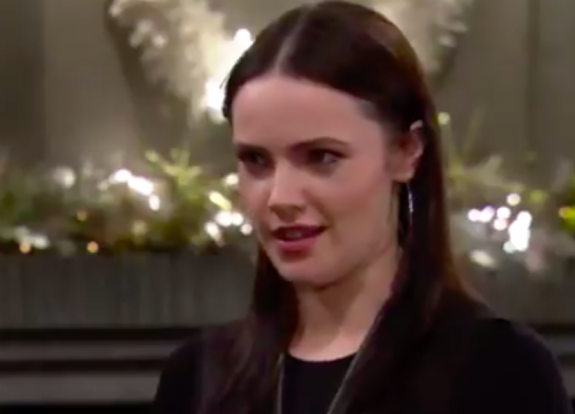 The Young and the Restless (Y&R) spoilers for Friday, January 10, tease that Mariah Copeland (Camryn Grimes) will show up at Sharon Newman’s (Sharon Case) house for a birthday celebration with Sharon and Faith Newman (Alyvia Alyn Lind). They’ll discuss Cassie Newman (Camryn Grimes) a bit, and after Faith goes to the stables, Mariah will mention Tessa Porter (Cait Fairbanks) going on tour and how she’s fine with it.

Meanwhile, at Crimson Lights, Nate Hastings (Sean Dominic) will arrive to meet with Nick Newman (Joshua Morrow), Devon Hamilton (Bryton James), and Elena Dawson (Brytni Sarpy). They’ll tell him about the idea for the medical clinic at New Hope, and they’ll ask him to oversee the medical protocol for the clinic. He’ll happily agree.

Next on Y&R, Tessa will pack at the apartment as she prepares to leave to go on tour. Devon will soon arrive, and Tessa will ask him to look after Mariah while she’s gone. Mariah will then arrive, and after Devon is gone, Mariah will note that this is the worst birthday ever, since Tessa’s leaving.

After a while, Tessa’s car will arrive, but Tessa won’t want to leave just yet. Mariah will say that it’s not goodbye and that she can’t come back until she’s a mega superstar. Tessa will say how grateful she is that Mariah believes in her, and they’ll kiss. Tessa will go, leaving Mariah crying behind.

Young And The Restless Spoilers: Phyllis Summers Gets Some Alone Time With Chance Chancellor

Next on Y&R, Billy Abbott (Jason Thompson) will learn that there’s no work for him right now at the Chicago consulting company. And across town at Society, Amanda Sinclair (Mishael Morgan) and Phyllis Summers (Michelle Stafford) will chat. They’ll get to know each other, which will include Phyllis discussing her affiliations with the Abbott and Newman families.

Phyllis will eventually mention her past relationship with Billy, which Amanda will note. Across the room, at the bar, Chance Chancellor (Donny Boaz) will talk with Abby Newman (Melissa Ordway) as he watches Amanda. Amanda will then get a text from Billy and leave while Phyllis calls someone to cash in on a favor.

After a while, Abby will get called away to some emergency at the Grand Phoenix, and Phyllis will join Chance. Chance will remark that he can see right through her, but that she keeps things interesting.

Next on Y&R, Nick will show up at Sharon’s house to talk about Cassie on her birthday. They’ll hug and end up looking through photo albums as the remember her. They’ll talk about Nick’s new venture, and after Nick leaves, Sharon will take a call about her biopsy, which is tomorrow.

Rey Rosales (Jordi Vilasuso) will then come home and express his concern for Sharon, since she’s been acting like she’s been overwhelmed. He’ll ask what’s going on, but Sharon won’t divulge what’s really going on. Instead, she’ll say that she just keeps getting reminders of how precious time is.

Young And The Restless Spoilers: Amanda Sinclair Opens Up About Her Abusive Ex

Next on Y&R, Billy and Amanda will meet at the little bar outside of Genoa City. He’ll apologize for how he handled things with Sharon at Crimson Lights, and she’ll wonder if he’s ashamed of their friendship. He’ll deny it, saying that he simply didn’t want Sharon to wonder.

They’ll discuss how Billy’s family is just waiting for him to screw up, and how Victoria Newman (Amelia Heinle) wants him to fit into a certain mold. Amanda will think that he’s just looking for balance. Talk will turn to Amanda and her life, and she’ll explain about how she got into law after one of her friends got mugged. She’ll note that she worked to create the life she wanted.

Then Amanda will say that she met who she thought was her soulmate, but that he eventually became controlling and the relationship got to the point where she had to get a restraining order against him, and he got one on her. Billy will understand her wanting to start fresh and avoid romance. They’ll toast to friendship, and Billy will wonder why it feels like he’s crossing a line.