The Young and The Restless Spoilers: Y&R Partners With The American Cancer Society For A Breast Cancer Awareness Storyline! 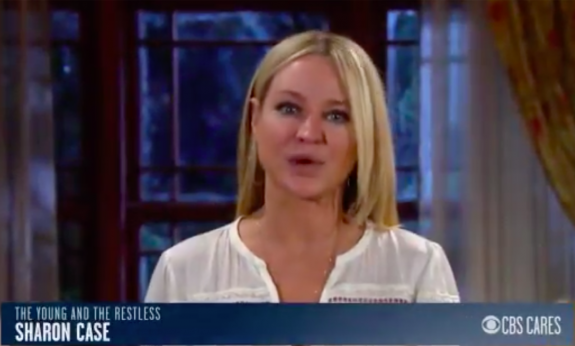 As viewers of The Young and The Restless know, Sharon Newman (Sharon Case) is facing breast cancer, and when she first found the lump in her breast had kept it a secret from her family and friends, at least until she could get her mammogram and ultrasound to see what was going on and if it was fluid or solid. If it is fluid, it is probably a benign cyst, but if it is solid, then it could be cancerous and a biopsy would be needed.

The mammogram is inconclusive, but the ultrasound shows that it is a solid mass and she will need a biopsy and a consultation with an oncologist. She is particularly concerned about the reactions of and the effects of a cancer battle on her teenage daughter, Faith Newman (Alivia Alyn Lind). Once she gets the results from the biopsy, Sharon informs her live-in boyfriend Rey Rosales (Jordi Vilasuso) that she has been diagnosed with breast cancer.

He then joins her to meet with an oncologist to start to get more information about her illness and how to treat it. Sharon will be leaning heavily on her friends and family, who will all be supportive, in the upcoming weeks as she battles the deadly cancer. At the end of the episode, which is scheduled to be broadcast on January 9th, will appear a CBS Cares PSA starring Case that will discuss early detection.

The Young And The Restless Spoilers: Y&R Head Writer Josh Griffith Released A Statement On The Storyline

The Young and The Restless head writer Josh Griffith released a statement on the storyline and said as follows: “The Young and the Restless has always tackled important social issues within the show’s rich storytelling. From AIDS and alcoholism to drunk driving and domestic abuse, we’ve consistently tried to focus on the human condition in an open and honest manner. We’re proud to be joining with the American Cancer Society to deliver this important message about breast cancer awareness.”

The Young and the Restless Spoilers: Chloe Risks Her Freedom To Keep Chelsea and Adam Apart @celebratesoaps #YR #YoungandRestlesshttps://t.co/0lpB4gl0oO

Y&R Spoilers: About The American Cancer Society And CBS Cares

The American Cancer Society is a global grassroots force of 1.5 million volunteers, dedicated to saving and celebrating lives and leading the fight for a world without cancer. The help it provides includes breakthrough research, free lodging near treatment, a 24/7/365 live helpline, free rides to treatment and convening powerful activists to create awareness and impact and that is just part of it. The American Cancer Society works diligently and continuously to attack cancer from every angle.

For information on breast cancer prevention and early detection, go to https://t.co/vqNLCATYkP. pic.twitter.com/wiyOjOAbAo