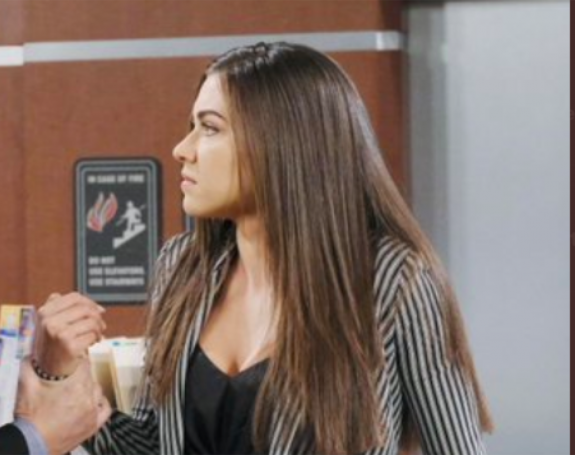 Days of Our Lives (DOOL) spoilers for Monday, January 13, tease that Ciara Brady (Victoria Konefal) will be floored when Victor Kiriakis (John Aniston) reveals his secret. He’s finally prepared to come clean, but he won’t admit anything close to what Ciara expected. Victor will let Ciara know that the innocent man they framed was Will Horton (Chandler Massey), not Ben Weston (Robert Scott Wilson).

DOOL fans will see Ciara fly off the handle over this bombshell. She’ll be furious with Victor and Xander Kiriakis (Paul Telfer) for letting Will believe he killed Adrienne Kiriakis (Judi Evans). They covered up Maggie Kiriakis’ (Suzanne Rogers) involvement in Adrienne’s death and allowed Will to take the fall, which was obviously a despicable thing to do.

Days Of Our Lives Spoilers: “Steveano” Reveals His True Identity To Kristen

Once Ciara realizes Victor and Xander had nothing to do with Ben’s setup, she’ll be crushed. Ciara has spent months following clues that couldn’t help Ben at all. She’ll feel like she’s back at square one when it comes to getting Ben out of prison.

Days Of Our Lives Spoilers: Clyde Weston Thinks He Has The Perfect Way To Free Ben Weston

Of course, Clyde Weston (James Read) thinks he’s got the perfect way to score Ben his freedom. He just suggested an escape plot, but Ben obviously isn’t going to be thrilled about that plan. After Ben shuts it down, Clyde will undoubtedly keep trying to sell him on it. He’ll feel like this is Ben’s last shot at surviving, so Ben will have to decide if he’s going to accept his fate or throw out the rulebook.

Other Days of Our Lives spoilers say Hattie Adams (Deidre Hall) will stir up some trouble. She’ll make life difficult for Kate Roberts (Lauren Koslow), which could put Stefano DiMera aka “Steve Johnson’s” (Stephen Nichols) scheme in jeopardy. Kate will have to do her best to handle Hattie, which is never an easy task!

Days of Our Lives Spoilers: Clyde Wants To Break Out With Prison – Will Ben Come Up With A New Scheme? https://t.co/S0OonfLDGL pic.twitter.com/AjZzsbcuyn

Meanwhile, Days of Our Lives spoilers say Kristen DiMera (Stacy HAiduk) will wrap her head around “Steve’s” claims. He just told Kristen he’s her father and seemed to get through to her. However, Kristen will need some answers on Monday. She won’t understand why Stefano looks like Steve, so he’ll explain the memory-implanting drama and count on her to keep quiet.