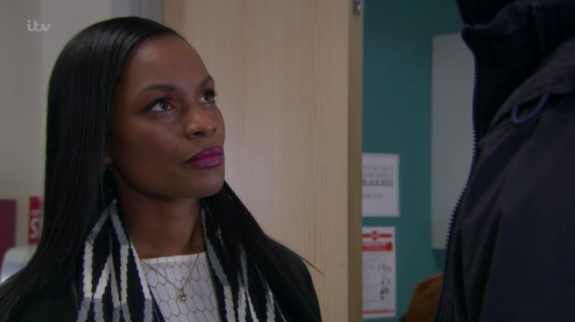 Nate Robinson’s (Jurrell Carter) mum, Cara Robinson (Carryl Thomas), made her first appearance on “Emmerdale” in Thursday night’s double bill. She wasn’t welcomed with a party but with an accident when she unintentionally ran over Moira Dingle (Natalie J Robb).

Moira was drunk when she stumbled into the road and that’s when Cara accidentally hit her with her car. She got out and found Moira unconscious in a ditch. Cara immediately called for help and Moira was rushed to the hospital.

Emmerdale Spoilers: Cain and Nate Shocked At The Sight Of Cara Robinson

When Nate arrived at the hospital to check on Moira, he was surprised to find his mother and that’s when Cara’s true identity was revealed. Cara had something to say about his son’s recent behavior and said she’ll take him back home. As expected, Nate has no plans of going anywhere and he told his mother that he wants to continue his new business at Wylie’s Farm.

Cain had a brief interaction with Cara at the hospital. It was obvious that neither Nate nor Cain was happy to see Cara in town. Meanwhile, Moira hoped that Cara would take Nate away from the village. She’s furious at him after discovering the role he played in destroying her marriage.

“I’m glad [Cara’s] got something about her. Hopefully, she’ll grab Nate by the scruff of the neck and drag him back home where he belongs,” Moira tells his son, Matty Barton (Ash Palmisciano).

“I mean it, Matty. Cain and me don’t stand a chance with him around. He’s got to go,” she continued.

Emmerdale Spoilers: Danny Returns, Manipulates Sarah But Will She Take The Bait? https://t.co/33sX6gb9zt

Emmerdale Spoilers: Who Is Cara Robinson?

Viewers know that it was Moira who summoned Cara to the village. She obtained the details of Nate’s mother from his employee form.

Thomas’ character was first mentioned back in October when Nate told Cain from his hospital bed: “Cara says hi.” Nate also brought up the time when Cain slept with Cara and ignored their letters, although it was Faith Dingle (Sally Dexter) who kept it from him.

Cara has never appeared on the soap in person before but her name was mentioned to provide viewers a backdrop of the complicated relationship between Cain and Nate.

Will Nate leave town with her mum peacefully? Or will Moira’s plan to get rid of him fall apart?