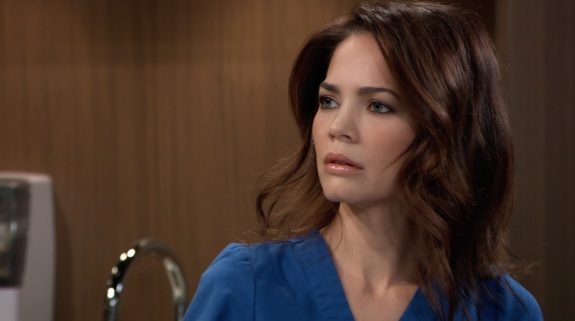 Liz tells Nik he is supposed to be dead. Nik says Liz is as beautiful as ever. Liz promises not to faint and hugs Nik. Nik tells Liz where he has been and tells her he married Ava Jerome (Maura West).

Liz and Nik compare their respective spouses. Nik had to bide his time until his plan was in place. Liz tells Nik about Hayden Barnes (Rebecca Budig) daughter. Liz has no idea that Nik is responsible for her leaving.

General Hospital’s Lucy Coe (Lynn Herring) wants Crimson to partner with Deception. Maxie Jones (Kirsten Storms) says she has to run it by Nina Reeves (Cynthia Watros). Nina is shocked to see Sasha Gilmore’s (Sofia Mattsson) face. Nina thought Sasha turned down the offer to model for deception. Lucy doesn’t know if they should be associated with Deception. Nina won’t do it without a new model.

Lucy says Sasha is a part-owner. Maxie disagrees with Nina’s decision to not partner with Deception. Sasha arrives and tells Nina her plan is just plain stupid. Sasha tells Nina the partnership has nothing to do with their history. Sasha says if Nina is the savvy businesswoman she thinks she is, she will jump at this. Maxie promises to be in touch as soon as she has the specifics worked out. Lucy offers Maxie a job.

General Hospital’s Sasha visits Michael Corinthos (Chad Duell) at the hospital. Michael is looking over applications for candidates for a nanny. Sasha thinks Michael is expecting too much. Michael wants to pull back from ELQ and watch Wiley Cooper-Jones (Theo and Erik Olson) himself.

Sasha tells Michael he can do both. Michael says he can coordinate with Brad’s schedule. Michael is glad Sasha is willing to help because this could cut into his free time. Sasha and Michael kiss. Lucy calls and interrupts. Lucy tells Sasha that Nina said no and wants her to come to Crimson now. Nina agrees to consider the proposal with changes.

General Hospital’s Jordan Ashford (Briana Nicole Henry) asks Jason Morgan (Steve Burton) to stop by. Jordan asks Jason about a delivery truck. Jordan wonders if Sonny and Jason have a new enemy. Jordan says the truck was found beside the road. Jason thanks Jordan for finding the truck. Jordan wonders what would happen if she asked for the manifest. Jordan demands to know if Sonny has a rival, old or new, in town.

Jordan thought they had come to an understanding. Jason will have the truck picked up when they are done. Jordan says Jason could give a class on stonewalling. Curtis Ashford (Donnell Turner) did a follow-up on Jordan’s friend’s death. Curtis says the guy died from a drug overdose. Jordan is shocked by this development. Jordan doesn’t believe this conclusion. Curtis has forwarded the police report to Jordan but won’t let her speak to his contact.

General Hospital’s Brad Cooper (Parry Shen) accuses someone of stealing his lab results. Willow Tait (Katelyn MacMullen brings the results to Brad. Willow says Brad left them in the break room. Brad gets defensive when she says forgetting is understandable. Willow brings Brad coffee. Brad thinks everyone is doubting him as a parent. Michael interrupts and says he has a strategy to help with Wiley. Brad refuses to let Michael go through with his plan to help. Brad says Lucas Jones (Ryan Carnes) would not want Michael to do this.

Brad suggests Willow take care of Wiley. Willow offers to change her schedule. Julian agrees with Michael, Willow shouldn’t need to do this. Brad pushes until Willow agrees to help. Julian pulls Brad away and tells him Sonny Corinthos (Maurice Benard) is watching them. Willow says Brad is intimidated by Michael. Willow is happy to spend this time with Wiley. Brad tells Julian that Michael was insisting on taking care of Wiley himself. Brad says Michael wanted to take over. Brad says he knows what he is doing. Julian is going to see that Brad gets all the help he needs.

General Hospital’s Sonny tells Julian Jerome (William DeVry) that he knows what he was discussing on the pier. Sonny tells Julian if he has something brewing he better pull back. Julian tells Sonny he protects his family as well. Julian says Sonny should know he doesn’t have a beef with Sonny or his family. Julian says he doesn’t want people to see Brad fall apart. Sonny accuses Julian of trying to help himself.

Sonny says Julian wants a chance to get close to Wiley. Julian demands to know who Sonny’s man was spying on. Sonny says people must not realize the coffee business is legit. Jason thinks someone wants to force Sonny to share. Jason tells Sonny how Diane Miller (Carolyn Hennesy) is handling the driver. Sonny plans to make this person pay if they won’t compromise, Sonny will retaliate.