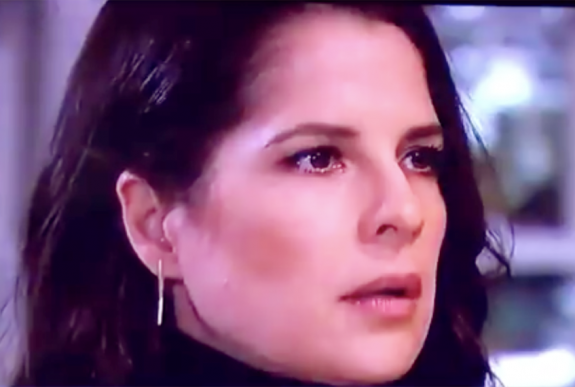 Sam (Kelly Monaco) and Jason (Steve Burton) have had many obstacles, through their on and off again relationship, that have been created to keep them apart. That is occurring once again in the form of Sam’s parole officer.

Sam was very hopeful that she would impress her parole officer and she thought she was close to doing so, right until the very end. Sam’s parole officer made note of Jason Morgan being a fixture in her life, as Danny’s father. It was not even mentioned yet that they were romantically together. The parole officer made it known that this could not be, as felons cannot socialize while on parole.

Diane (Carolyn Hennesy) let the couple know that this is a common stipulation for parolees, but Sam felt that it was different for this parole officer. Sam felt that she was fixated on Jason not being in her life and not just stating a common rule. Will it turn out to be true or was Sam just looking into it too much? What if she was not?

It is known that not all followers of Dawn of Day have stopped believing in the message and in its leader, Shiloh (Coby Ryan McLaughlin). This is shown by many Port Charles residents receiving a text to a memorial in Shiloh’s honor, Sam among them. If there are still “Dawnies” around town than havoc can still come to Sam’s doorstep, as she was the biggest betrayer of them all. Sam could have an unknown target on her back by many of Shiloh’s followers.

Can it be possible that Sam’s parole officer is a follower of Dawn of Day? If so, she will be looking for any way to get Sam back in prison for her crime of murdering Shiloh. If she did her research at all, then she would have known Jason has always been Sam’s weakness. Are Dawn of Day followers trying to get Sam back in prison by breaking her parole or can it be more sinister than that?