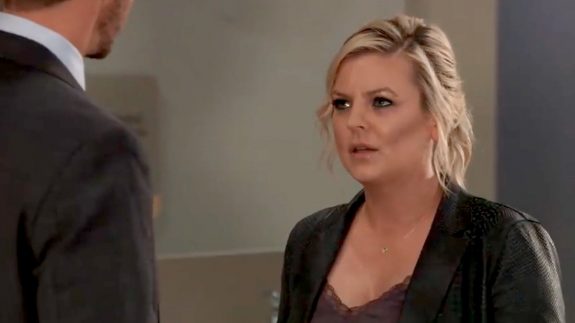 General Hospital (GH) spoilers for Monday, January 13, tease that Brook Lynn Ashton (Amanda Setton) will have a surprise in store. She’ll make a “really big announcement,” so her family will have a chance to react. This may be something career-related since Brook Lynn’s been backed into a corner lately.

GH Spoilers:  Brook Lynn Ashton Will Have A Surprise In Store

Over with Dustin Phillips (Mark Lawson), he’ll continue to bond with Lulu Spencer (Emme Rylan). They’ll share a romantic evening together before Lulu suggests taking this back to Dustin’s place. However, Dustin’s past will come back to bite him on Monday. A face from his history will cause some drama for this couple, so it’ll be interesting to see how it all plays out.

If Brook Lynn happens to be Dustin’s former flame, that would certainly rile up Lulu! Of course, this could involve someone else in Port Charles. Whatever the case, Dustin and Lulu will soon be tackling quite a challenge.

Speaking of challenges, Maxie Jones (Kirsten Storms) would clearly like to have a bigger one. She’s done about all she can do at Crimson and her talents are being wasted there. On Monday, Damian Spinelli (Bradford Anderson) will pop back up in Port Charles and seek out Maxie for a chat. During this conversation, Spinelli will realize Maxie might be leaving Crimson.

General Hospital Spoilers: Maxie Jones Won’t Be Ready To Turn In Her Resignation

Maxie won’t be ready to turn in her resignation or make any kind of definite decision yet. Nevertheless, she’ll probably confess she’s not feeling very fulfilled these days. While Maxie opens up to Spinelli, Tracy Quartermaine (Jane Elliot) will try to talk some sense into Michael Corinthos (Chad Duell). Ned Quartermaine (Wally Kurth) will also be on hand as Tracy lashes out over Michael’s priorities.

Tracy will wonder what could possibly be more important than the future of ELQ. She won’t think Michael’s focused enough on the family legacy, so some Quartermaine infighting is brewing. Next, Alexis Davis (Nancy Lee Grahn) will get a visit from Sam McCall (Kelly Monaco). She’ll learn Sam and Jason Morgan (Steve Burton) have a plan, so she’ll ask how they’re going to expedite this reunion.

Sam will bring Alexis up to speed on the hunt for Peter August (Wes Ramsey) proof. She’ll feel confident Jason can make it happen – and he’ll definitely be on top of things soon. In Monday’s GH episode, Jason will run into Franco Baldwin (Roger Howarth). Franco will offer Jason his gratitude and credit him for saving his life. He’ll also have similar words of gratitude for “hero” Peter, who’ll get an awkward invite.

GH Spoilers: Franco And Elizabeth Baldwin Will Encourage Peter To Join Them For Dinner

Franco and Elizabeth Baldwin (Rebecca Herbst) will encourage Peter to join them for a special dinner. They’ll suggest it’s their small way of saying “thank you” for Peter’s lifesaving actions. Franco and Liz have no clue that Peter’s the one who ordered the hit in the first place!

Peter will naturally be uncomfortable with all this gushing over his heroics. He’ll turn down the dinner invitation as Jason watches nearby. General Hospital spoilers say Jason’s suspicions will rev up, so he’ll really focus on pulling off this mission. He’ll want to take Peter down as soon as possible and reunite his family.

It looks like some fantastic scenes are coming up. General Hospital fans won’t want to miss the hot drama ahead! We’ll give you updates as other GH news and rumors emerge. Stick with the ABC soap and don’t forget to check back often for the latest General Hospital spoilers, rumors, updates and news.