The Bold and the Beautiful Spoilers: Monday, January 13 – Hope Breaks Down In Brooke’ Arms – Liam Makes A Confession To Steffy 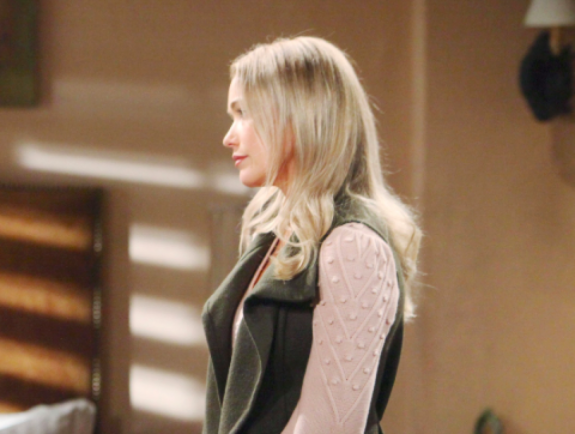 The Bold and the Beautiful spoilers for Monday, January 13, tease that Hope Logan (Annika Noelle) will be feeling devastated. As B&B viewers know, she’s just left the cliff house after seeing Liam Spencer (Scott Clifton) and Steffy Forrester (Jacqueline MacInnes Wood) kissing passionately. Hope arrived on the scene, witnessed the kiss, then unleashed on Liam, telling him that their relationship was over.

Of course, Thomas Forrester (Matthew Atkinson) orchestrated the whole scene. He knew that Hope was on her way to the cliff house and he even called Steffy to let her know the precise moment when she should kiss Liam – and Steffy willingly complied.

B&B Spoilers: Hope Logan Is Devastated By Her Breakup With Liam Spencer

On Monday’s B&B episode, Hope will head back home, where she’ll encounter her mother, Brooke Forrester (Katherine Kelly Lang). Hope will finally break down in Brooke’s arms as she tells her mom what she saw between Liam and Steffy. Brooke will probably be horrified, as she’s always been on “team Lope.” She’ll surely offer her daughter comfort during this difficult time.

The Bold And The Beautiful Spoilers: Will Steffy Get A New Love Interest?

It seems that Hope will be certain that her relationship with Liam is over for good, and it looks like she’ll even pack Liam’s bags for him and prepare to kick him out of the cabin. Meanwhile, it seems that Steffy will be feeling pretty guilty about her decision to play along with Thomas and kiss Liam on cue. The Bold and the Beautiful spoilers say that she’ll be feeling remorseful about her decision to pull Liam into a kiss and set all of this in motion.

It appears that Steffy and Liam will spend some time commiserating on Monday’s B&B episode, and as they talk, Liam will wind up making a confession to Steffy. Of course, Liam won’t know that Steffy was a part of a larger plan designed by Thomas, so he’ll feel comfortable making his big confession.

Exactly what Liam confesses to remains to be seen, but it might involve the fact that he still loves Steffy. As B&B viewers know, he already admitted on the cliff that he still loves Steffy to Hope, so he might take the opportunity to tell Steffy personally how much she means to him. He could also confess to not spending enough time with Kelly Spencer (Zoe Pennington) and extend an offer to recommit to being an attentive father.

Or Liam’s confession could have something do with Hope. He could confess that his relationship with Hope was never going to work as long as Thomas was in the picture. Really, “Lope’s” relationship was doomed from the moment that Hope decided to go forward with adopting Douglas Forrester (Henry Joseph Samiri). Perhaps Liam will realize this in the aftermath of what happened on the cliff.

The Bold and the Beautiful Spoilers: Wyatt Turns Down Mysterious Woman Wearing Nothing But Lingerie https://t.co/ccYY1fSoxq pic.twitter.com/JLDmhhXwYB

B&B Spoilers: Will Liam Spencer Accept That His Relationship With Hope Logan Is Over?

As B&B viewers know, Liam was never entirely comfortable with the idea of Hope adopting Douglas, which Hope never understood. Liam always argued that he was stretched thin between Kelly and Beth Spencer (River Davidson and Madeline Valdez) as it was, and that adopting Douglas would put a further strain on his relationship with his daughters.

At any rate, Liam and Steffy will have a lot to talk about, and we’ll see if Steffy ultimately confesses to Liam about her part in Thomas’ plan. Liam may want to even go see Hope and try to work things out with her, although it certainly seems that she’s firm in her decision to continue her affiliation with Thomas, which likely means “Lope” is finished for good.